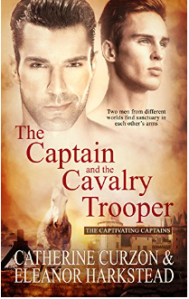 Captain Robert Thorne is the fiercest officer in the regiment. Awaiting the command to go to the front, he has no time for simpering, comely lads. That’s until one summer day in 1917, when his dark, flashing eye falls upon the newest recruit at Chateau de Desgravier, a fresh-faced farmer’s boy with little experience of life and a wealth of poetry in his heart.

Trooper Jack Woodvine has a way with strong, difficult stallions, and whispers them to his gentle will. Yet even he has never tamed a creature like Captain Thorne.

With the shadow of the Great War and the scheming of enemies closer to home threatening their fleeting chance at happiness, can the captain and the cavalry trooper make it home safely? More importantly, will they see peacetime together?

This is book one in the new ‘Captivating Captains’ series, and what an introduction! I think this is set to be a powerful and addictive series and a great addition to both Ms Curzon and Ms Hartstead’s catalogue, it is astoundingly touching and beautifully portrayed. There is heartache, tender romance and danger all wrapped up in brilliant story from an era that really doesn’t get show cased enough in Historical Romance – which I don’t know why, as it was such a intriguing era that had so much going on.

On one summer day in 1917 a young trooper arrives at the Chateau de Desgravier, where a segment of the British Army is based. Trooper Jack Woodvine is a raw and inexperienced soldier having enlisted late due to a shoulder injury and so far, he’s seen very little in the war, but what he lacks in experience he makes up for in his skills with horses. He can calm and soothe the most stressed and temperamental animal and in doing so can also soothe the owners. As soon as he gets to the Chateau he soon finds out that this place could just be a dangerous as being at the front.

Budding poet Jack has always thought there was something not quite ‘right’ about him, his desires don’t follow with what is expected, he has always hidden that side of himself and has never acted on his urges. Up until he had joined the army, he was always ashamed and embarrassed about his what he calls ‘unnatural desires’ and then he stepped into the Chateau de Desgravier and meets his commanding officer; the fierce, professional and charismatic Captain Thorne, who captures Jack’s attention and his imagination from the first moment he see’s him. But, surely such a fine figure of a man wouldn’t be interested in a lowly farmer’s son.

Jack is a real cutie! He is just wanting to do his bit for his country, even though he had broken his shoulder – which would have meant that he would have been exempted – he still joined. Jack is such a cute lad, he is naive of the world around him I don’t think that he thoroughly realises what is in store for him and what he would be facing. Yet he yearns to take his place amongst all the others who have taken the King’s shilling, and I respect him for that. He isn’t made for war though, but he does feel very strongly about doing the right thing. I think in a way he wants to prove himself, he wants to show that he isn’t just a farmer’s son.

Captain Thorne – Robert, is by far the most gruff and fiercest of all the officer’s, he is an experienced Captain and has seen way too much fighting. He is based at Chateau de Desgravier but he knows that it is only a matter of time before he and men at the Chateau will be deployed to the front, especially with the way the war is going and the amount of men that the army is losing on a daily basis. He really isn’t interested in anyone and finds that he isn’t in the right frame of mind to have his head turned by handsome young lad’s, that is until he meets his newest recruit.

Jack sighed, a laugh in his throat.

“that’s my one remaining mystery…”

Jack is given the job as Robert’s groom, to care for his temperamental white horse; Apollo. Under Jack’s gentle and unwavering care of Apollo he starts to calm the tormented mind of the horse and in the process he and Robert begin to grow closer until they finally give into their mutual attraction for one and other. But, all does not go plain sailing for our couple, not only are they under constant threat from the war but there is danger’s lurking within the Chateau de Desgravier itself that Jack ad Robert have to overcome.

Robert is a good man he wants to do the best for his boys, if he could he would send each and everyone of them home, so they can’t be hurt by the vicious fighting. He has seen what this brutal and violent war is doing to innocent young men and he has aged ten years since it started. He has been in the trenches and at the front and that has darkened him in ways that may never see light again, it has jaded him. Meeting Jack has really brought some fun and love back into his life and light back into his dark nearly dead eyes. And in return Robert is an attentive, caring and super sensual lover.

They are such a cute couple and there are some really lovely and tender moments between them, I particulay like those quiet moments when they are just being themselves. There is a really lovely scene when they are having a quiet moment together where Jack is quietly writing a poem about Apollo while Robert is secretly drawing him. It’s so beautifully written and shows them for the tender and romantic men they are and gives them the moment of calmness before the storm as there are dangers on the horizon not just with the war but closer to home in the shape of their own comrades.

“I love you, Robert. No matter what happens, I always will.”

“Wherever we may be, I shall never love another but you.” Thornes voice trembled, just enough for Jack to sense the trepidation in him. “And I never have until I saw you.”

“I loved you from the moment you first smiled at me.”

There are some real characters at the Chateau, from the manipulating and bullying Quin ‘Queenie’ to the cheeky and rakish, choir boy Bryn, the mix of different personalities gives the story a sense of real life.

This is wonderful, a haunting tale of love found in the most unexpected and dangerous places between two characters, who are sensitive and courageous. Even though it is set right on the front with the war in the background, at a time where there was so much bloodshed and loss, the story is very much about Robert and Jack. It is very moving and beautifully written – not that I was surprised at that, as these two ladies are wonderful narrators. I do love The Captain and The Trooper, I will admit to being, a little biased as I already have a love for this era, but this really captures the imagination of that period but in a completely new and profound way.

I am looking forward to reading more from The Captivating Captain’s, I think this series is going to be a wonderfully moving and addictive and I can’t wait to see where we go next.

This is so good, I would recommend this to anyone who likes historical romances. Even for those that don’t usually read this genre I would highly recommend it, all I will say is put a side what you think of WW1 era romances and read this with fresh eyes, because it is fabulous and so wonderfully romantic, and I am positive you will fall head over heals for Robert and Jack. 😉

This was a ARC  copy via the authors in exchange for an honest review.

The Captain and the Cavalry Trooper is to be released on 3rd April and can be pre-ordered from Amazon.