Hello, sunshines, thank you for stopping by! I have the huge pleasure to be today’s stop on this brilliant blog tour; The Rose and the Whip by Jae Hodges. Not only will I be sharing this book with you all, but I also have an amazing guest post, I hope you love it as much as I do.

The Rose and the Whip by Jae Hodges

Lidia Wardell walked naked through the Newbury meeting house. She was prosecuted, and publicly whipped for this crime.

This event is common historical knowledge. The Rose and the Whip is set in the Massachusetts Bay Colony in May 1663, but tells the entire story of systematic persecution of dissenters, by dissenters. Lidia relates the story of her life, and the series of events that culminated in her decision to take this action in protest of the Puritan community leaders’ treatment of Quakers. As she is charged, sentenced, and tied to the whipping post, then subsequently thrashed with twenty or thirty lashes, she critically examines each of these events and reflects on how they served to transform her and her perspectives on truth and faith.

The Poetry, The Rose and The Whip by Jae Hodges

The Rose and the Whip follows the punishment of Lidia Wardell for walking naked through the Newbury Meeting-house in the Massachusetts Bay Colony in protest of the Puritan treatment of Quaker women in 1663. As she is tied to the whipping post, and lashed with thirty cruel stripes, Lidia recalls the events leading up to her decision to voice her discontent in this way. Following her punishment, the abuses did not stop but eventually served to run her and her husband and three children out of their home in Hampton (now in New Hampshire).

The events in Lidia’s life during the years between 1659 and 1665, and the characters that affected her thoughts and her feelings, were all taken from court records and provincial documents, and some first and second person accounts published into the 18th century. Using this documentary evidence gave some insight into the people and their motivation toward the roles they played, but only so far as their two-dimensional character was concerned. For more depth, I chose to look at poetry for inspiration.

John Greenleaf Whittier was a notable nineteenth century poet and a Quaker. He was born and raised in Haverhill, Massachusetts, just fourteen miles from where Lidia made her statement. And he was visiting relatives when he died in Hampton Falls, New Hampshire, walking distance to Lidia’s home. All his life he listened to the folktales and the legends, and he grew sensitive to social and moral issues gathering momentum throughout the 1830s and 1840s. Poetry was his outlet.

Whittier wrote at least nine poems about the persecution of Quakers during Lidia’s time, and many of them spoke to the treatment of Quaker women specifically. They were likely crafted from bits and pieces of the stories he knew well, and shouldn’t be accepted as anything more than historically relevant, but they helped me shape the hearts and souls of many of my characters.

Two of these poems were significant to my writing of The Rose and the Whip: “The King’s Missive (1880) and “How the Women Went From Dover,” (1883). In the “The King’s Missive” I found my best descriptions of Governor John Endicott along with his clerk, Edward Rawson, and their encounter with Samuel Shattuck whom Endicott had previously banished from the Colony under pain of death should he return. King Charles II had been restored to the British throne in 1660, sensitive to the unrest left by Oliver Cromwell and the Puritans. So when Quaker Edward Burrough approached the King in September 1661 with a plea to stanch the flow of innocent Quaker blood in the Colony, the King acted quickly by issuing a mandamus to be carried by Shattuck to Endicott. Endicott was a shrewd man, but he knew how to pick his battles. The excerpt below illustrates the veritable chess match the two played when Shattuck showed up with the King’s missive. Quaker men did not accept the authority of Puritan government and church officials, and so left their hats on in their presence which particularly and continuously piqued the ire of these officials. Endicott was caught off guard by the arrival of this messenger, and the King’s instruction, and was not, at least yet, in a position to risk the King’s displeasure by disrespecting his messenger.

“Off with the knave’s hat!” An angry hand

Smote down the offence; but the wearer said,

With a quiet smile, “By the king’s command

I bear his message and stand in his stead.”

In the Governor’s hand a missive he laid

With the royal arms on its seal displayed,

And the proud man spake as he gazed thereat,

Uncovering, “Give Mr. Shattuck his hat.”

“How the Women Went From Dover” tells the story of Anne Colman, Mary Tomkins and Alice Ambrose who were tied to the cart’s tail, stripped from the waist up and meant to be driven from town to town (eleven in all from Dover south to Dedham) where they would each receive ten stripes apiece. It was winter, and there was snow on the ground, not to mention nearly ninety miles of rough trails. The procession was on its way from Hampton, the second village, when the three were rescued by a kind-hearted soul. Lidia’s husband, Eliakim, was most certainly there when the constable paraded the women through the town, and his time spent in the stocks for the tongue-lashing he gave to one of the priests is well documented. But there is one part of the poem I used to put Lidia there as well.

Then a pallid woman, in wild-eyed fear,

With her wooden noggin of milk drew near.

Her draught away from a parching throat.

For fines, as they took your horse and plough,

She said; “they are cruel as death, I know.”

It is true that the Reverend Seaborn Cotton, the Hampton town priest, would regularly take his rate (a tax paid by each of a town’s inhabitants for the upkeep of the priest and his family) on the Wardell’s by collecting food and livestocks. Just two months after the three vagabond women were brought to the Wardell’s home to rest on their way out of the Colony, Cotton sold Wardell’s rate to an unscrupulous neighbor who came and took as much of the Wardell’s corn as he pleased; the next month, Cotton sent a servant to collect a beautiful pied heifer; and the next month after that, the court fined the Wardells for absenting themselves from the weekly worship by taking a fine saddle-horse worth much more than the fine itself. After that, the court began taking the Wardell’s land.

I’d like to end with a third poem, if you’ll indulge me for a little while longer. “Cassandra Southwick” (1843) tells the story of a young girl-child who was very nearly sold into slavery in payment for her father’s fine for not attending worship. The Southwicks as a family feature prominently in The Rose and the Whip, though I didn’t use this story. In reality, it was Cassandra’s two children, her son Daniel and her daughter Provided, who were dragged to the docks in an attempt to sell them at auction for transport to Barbadoes. Like the three vagabond women, these children were rescued when all the harbor ship’s captains declared they would let their ships sink under the weight of silver bars and Spanish gold coins before they would take her as a captive on board. As Whittier tells it, Endicott, with a sneering priest and his baffled clerk, turned away in disgusted silence and fled, leaving the sheriff to crush their parchment warrant and release the girl to her freedom.

All night I sat unsleeping, for I knew that on the morrow

The ruler and the cruel priest would mock me in my sorrow,

Dragged to their place of market, and bargained for and sold,

If you’re interested in more of Whittier’s poetry about the Quaker plight, I suggest the following:

“Banished From Massachusetts” (No date)

Photo Credits:“John Greenleaf Whittier & The King’s Missive” by Melissa Davenport Berry at https://www.ancestoryarchives.com/2015/07/john-greenleaf-whittier-king-missive.html?m=0; “How the Women Went from Dover” at https://nutfieldgenealogy.blogspot.com/2012/02/how-women-went-from-dover.html; and “A Country Built on Religious Freedom” by Jordan Bray at https://medium.com/@dmegivern/a-country-built-on-religious-freedom-b1049dcc87d2

Everyone has a history and a story. Jae uses the most alluring stories from the chronicles of her own ancestry and others around her to create timeless tales of everyday people making history. On her quest to capture the essence of walking in their footsteps, she travels and uses her pencil and camera lens to imagine them in their own surroundings.

Jae lives on the Tennessee River in Alabama with her husband and companion pooch.

Wednesday, July 29
Review at Passages to the Past

Thursday, July 30
Interview at Passages to the Past

Saturday, August 1
Review at Reading is My Remedy

Friday, August 7
Feature at I’m All About Books

– Giveaway ends at 11:59 pm EST on August 20th. You must be 18 or older to enter.
– Paperback giveaway is open to the US only.
– Only one entry per household.
– All giveaway entrants agree to be honest and not cheat the systems; any suspicion of fraud will be decided upon by blog/site owner and the sponsor, and entrants may be disqualified at our discretion.
– The winner has 48 hours to claim prize or a new winner is chosen. 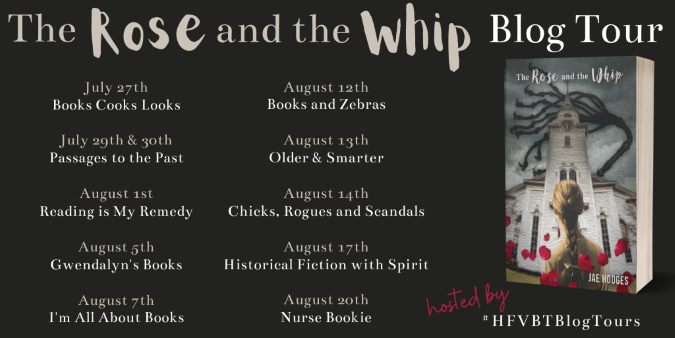