Hello, Sunshines, I hope you are all safe and well? I have the huge pleasure to be sharing my review of; The German Heiress by Anika Scott. So grab a cuppa and let me tell you about this fabulous book. 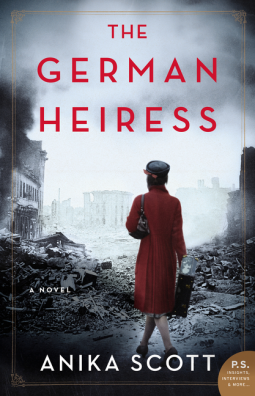 The German Heiress by Anika Scott

For readers of The Alice Network and The Lost Girls of Paris, an immersive, heart-pounding debut about a German heiress on the run in post-World War II Germany.

Clara Falkenberg, once Germany’s most eligible and lauded heiress, earned the nickname “the Iron Fräulein” during World War II for her role operating her family’s ironworks empire. It’s been nearly two years since the war ended and she’s left with nothing but a false identification card and a series of burning questions about her family’s past. With nowhere else to run to, she decides to return home and take refuge with her dear friend, Elisa.
Narrowly escaping a near-disastrous interrogation by a British officer who’s hell-bent on arresting her for war crimes, she arrives home to discover the city in ruins, and Elisa missing. As Clara begins tracking down Elisa, she encounters Jakob, a charismatic young man working on the black market, who, for his own reasons, is also searching for Elisa. Clara and Jakob soon discover how they might help each other—if only they can stay ahead of the officer determined to make Clara answer for her actions during the war.

Propulsive, meticulously researched, and action-fueled, The German Heiress is a mesmerizing page-turner that questions the meaning of justice and morality, deftly shining the spotlight on the often-overlooked perspective of Germans who were caught in the crossfire of the Nazi regime and had nowhere to turn.

“Fans of The Tattooist of Auschwitz will be fascinated by Scott’s portrayal of post-war Germany.”–Woman’s Magazine (UK)

“The novel delivers interesting discussions on guilt, redemption, and the actions of ordinary people in extraordinary times.”–Booklist

“Scott’s magnetic debut follows one woman’s quest for survival amid the devastation of post-WWII Germany… Scott’s narrative is embellished with realistic depictions of rubble-filled German cities, scavenging residents, and moral questions about Clara’s family ties to the Nazi regime. Fans of WWII fiction will be intrigued by Scott’s exploration of how war changes the moral compass of its victims.”–Publishers Weekly

“Meticulously researched and plotted like a noir thriller, The German Heiress tells a different story of WWII– of characters grappling with their own guilt and driven by the question of what they could have done to change the past.”–Jessica Shattuck, New York Times bestselling author of The Women in the Castle

“Scott transports readers back to Germany in the aftermath of this war, showing both the heartbreak and heroism of a once powerful businesswoman known as the Iron Fraulein. Clara Falkenberg’s confusion and compassion, the courage and corruption of those she loved–all of it resonated deeply and led me to ask, what would I have done if I were forced into her tragic position? It’s impossible to know, of course, but this remarkable novel made me dig even deeper, longing to be resilient like Clara in the face of evil…a story that will stick with you for a lifetime!”
–Melanie Dobson, award-winning author of Catching the Wind and Memories of Glass

“Anika Scott’s finely drawn characters in The German Heiress bring to life not only the struggle to rise from the ashes of war, but also the depth of resolve often required to gain redemption. Illuminating and beautifully rendered.”
—Susan Meissner, bestselling author of The Last Year of the War

“Anika Scott’s riveting novel, The German Heiress, compellingly explores the nature of innocence and guilt, and the human desire for redemption. A terrific book with historical detail skillfully woven into the fabric of the story. An absolute must-read for all fans of World War II fiction!” —David Gillham, New York Times bestselling author of City of Women and Annelies

“I loved [The German Heiress]. It’s a special novel that opens one’s mind to aspects of history we on the “winning” side have given little thought to, and a moving story of courage and everyday heroism rising to meet unbearable challenges.”–Alex Marwood, international bestseller and Edgar and Macavity Award winning author of The Wicked Girls

“The kind of novel we need now more than ever…The German Heiress achieves what the best historical fiction can, asking us to see the past, and then pushing us to see ourselves in that past, demanding: Who would you have been then? What would you have done? Unflinching and absorbing, The German Heiress does not let you look away.”–Sarah Blake, New York Times bestselling author of The Postmistress and The Guest Book

“What a great debut! I loved this book, especially since it looks at the aftermath of war from a rare perspective: the appalling suffering that Germans faced in their devastated cities after 1945, and the guilt of those who’d followed the Nazi rules. It still haunts me, days after finishing it.”–Liz Trenow, New York Times bestselling author of The Poppy Factory and The Silk Weaver

Well, this is marvellous, what an incredible debut! If I had read this without knowing beforehand that this was Anika’s first book then I wouldn’t have believed it – in fact even now I am still astounded – this is pure class

I have read a lot of books set in this era, n fact I was reading ww2 historical fiction before I found romance, there is something about this era which really captures the imagination especially when it is so flawlessly written like this is.

The majority of the book I have read has been focused more on the allies, the British, the French resistance and what happened during the war itself around Europe, it is so rare to find a book where the reader sees the story through the perception of Germans who were sort of stuck in the middle. I do think that certain aspects of that war have been lost in time, those stories have been left to fade into history – which is understandable with the horrors that happened during that bloody terrible war, but a little sad too that there are innocent voices who haven’t been heard. Thank goodness for gifted authors such as Anika Scott for bringing the voices of the likes of Clara Falkenberg to the ears of the world.

The German Heiress is an amazing book; full of intrigue, drama, danger, surprises, twists and turns, a beautifully constructed and daring plot which keeps you guessing throughout. I can guarantee you will be hooked from page one, and that you may end up reading the entirety of this book in one go. There are some unsettling and uncomfortable moments, but this is a WW2 novel so it’s to be expected.

Clara Falkenberg who was once destined to be the most sought after and wealthiest heiress of the biggest ironworks in all of Germany now is living under an alias after she fled her home and everything she knows as she was discovered sneaking extra rations into to help feed her workers, now she must live in the shadows in fear of her life and of the Nazi’s, she was helped by a friend; Elissa.

The war has been over for the last two years, Clara is no safer than she was before, she has returned to her home to find the truth about her families past, it is once arriving that she finds her much loved friends; Elissa has disappeared which starts off a journey of danger and discovery as she tries to find the answers to her burning questions, find her friends and try to evade capture from a ruthless British officer who thinks she is guilty of war crimes.

Clara is an interesting character, I was in two frames of mind about her though, in one moment I liked her for her bravery and trying to the right thing by feeding extra rations to the workers and then the next she is an untrustworthy war criminal, in those moments I desperately wanted to see justice done for those who couldn’t speak for themselves.

This book really pounds at the emotion, it is a complex mixture of feelings as you read. The plot isn’t taxing, it is very easy to read yet it does pull you in, it’s compelling reading. The writing is solid, there is a lot of research that has been put into this book.

I applaud Anika for writing such a gripping, engaging, thought-provoking and illuminating tale which certainly is set apart from all others that are set in this era. This is a stunning debut, and I know from the quality of this book Anika Scott with have a long and successful writing career and I personally cannot wait to read more from her.

This was a complimentary copy via the publisher, which I voluntarily and honestly reviewed. Thank you, Bianca, at Harper Collins / Willam Morrow

Anika Scott was a journalist at the Philadelphia Inquirer and the Chicago Tribune before moving to Germany, where she currently lives in Essen with her husband and two daughters.

She has worked in radio, taught journalism seminars at an eastern German university, and written articles for European and American publications. Originally from Michigan, she grew up in a car industry family. This is her first novel.