Hello Sunshines, I hope you are all safe and well?! I have an epic post for you all today, I have the huge pleasure to be today’s stop on this amazing blog tour for: The Night Is Done by Sheila Myers. Not only will I be sharing this gorgeous book with you all, but I have a wonderful guest post by Sheila which is a brilliant read, and there is a chance to win a copy of The Night is Done. As always grab that cuppa and enjoy!

The Night is Done by Sheila Myers

William and Ella Durant, heirs to a bygone fortune, are recounting the events that led to the Durant family downfall during the Gilded Age. In 1931 William returns to visit the estate he once possessed in the Adirondacks to speak with the current owner, copper magnate Harold Hochschild, who is writing a history of the region and wants to include a biography of William. Simultaneously, Ella is visiting with an old family friend and former lover, Poultney Bigelow, journalist with Harpers Magazine, who talks her into telling her own story. William recounts the height of his glory, after his father’s death in 1885 when he takes control of the Adirondack railroad assets, travels the world in his yacht and dines with future kings. However, his fortune takes a turn during the Financial Panic of 1893 and amid accusations of adultery and cruelty. Ella’s tale begins when she returned from living abroad to launch a lawsuit against her brother for her fair share of the Durant inheritance. The court provides a stage for the siblings to tear each other’s reputation apart: William for his devious business practices and failure to steward the Durant land holdings, and Ella for her unconventional lifestyle. Based on actual events, and historic figures, The Night is Done is a tale about the life-altering power of revenge, greed and passion.

“Myers writes with skill and has chosen well in deeply researching the Durant saga, which remarkably parallels Greek tragedy. It’s a truly engrossing story, and Myers does it justice.” – Kirkus Reviews (Starred Review)

“Myers satisfyingly concludes her historical trilogy set in the Gilded Age by presenting the detailed downfall of ruthless real estate mogul William West Durant; his exasperated wife, Janet; and his estranged sister, Ella. In 1931, the penniless Durant recounts his tragic life. After inheriting his father’s vast wealth and interest in the Adirondack Railroad, William immediately begins to make bad investments. He squanders money on yachts, panders to princes, and builds mansions he can’t afford to run, all while hiding assets from Ella. She sues him for her rightful inheritance and tries to overcome discrimination to become a novelist. Meanwhile, Janet, verbally abused and infantilized by William, begins an affair with her doctor. Myers expertly depicts a precarious era soaked in vicious gossip, stained reputations, and ostentatiousness. Readers will enjoy the historical details that bring this Gilded Age soap opera to life.” – Publishers Weekly

“While the covers of Myers’s trilogy are done in subdued pastels, the pages inside flash with forbidden romance and a family torn apart by greed.” – Betsy Keepes, The Adirondack Explorer

“The trilogy of the Durant family is capped by the fascinating final volume, The Night is Done. In a vein of nostalgia, the story ends in William West Durant’s last years and closes out a saga of tragic proportions as the vast Durant wealth and privilege is reduced to impoverished circumstances.” – Harvey H. Kaiser, author, Great Camps of the Adirondacks

“The builders of the first “Great Camps,” the Durant family defined the Adirondack experience during the Gilded Age. Sheila Myer’s trilogy of novels chronicling their saga combines great historical research with compelling writing. The Night is Done is the capstone novel of the saga and takes the story to the end of the Durant fortune where bankruptcy and retribution dominate the family’s relations. The book is a great read for those interested in American history or the Durants.” – Garet D. Livermore, Exec Director, Sagamore Institute of the Adirondacks

Doc Durant and Hell from Hell on Wheels by Sheila Myers

Doctor Thomas C. Durant (Doc Durant), one of the men who forged the Transcontinental Railroad in the 1860s, is a colorful historical figure. Newspaper accounts and diaries left behind by men who knew him describe him as ferocious looking, tall, dark, and patrician. Although he had trained as a doctor, he eventually turned to business. His specialty, like many tycoons of the time, was in trade and rail. It is no wonder that AMC made a television series about these men called Hell on Wheels.

Durant was a complex man who had many admirers and just as many who both feared and loathed him. He had frequent run-ins with the workers on the Union Pacific, mostly Irish immigrants, who often threatened to strike if they were not paid on time. He was reviled by colleagues, some of whom left the company in protest, others who got him kicked off the Union Pacific Board after the line was finished in 1869. And he made enemies of his rivals, especially Collis P. Huntington, who was head of the Central Pacific Railroad. Both men were competing for government funds based on the miles of track laid.

Like Huntington, Doc Durant knew how to influence people that mattered, persuading members of Congress and others to invest in the Transcontinental and Union Pacific. In 1866 he orchestrated a large gathering of dignitaries and newsmen at the 100th Meridian in Nebraska to showcase the accomplishments of the Union Pacific. In his grand style, Doc Durant managed to pull off an enormous publicity stunt. The guests were brought in by rail, set up in encampments on the plains, fed and entertained. Durant paid the Pawnee Indians to put on a mock show of attacking the railroad and fighting the Sioux.

His lavish spending back home in New York was also legendary. A biographical piece in the New York Tribune in 1869 reports he frequently entertained people on his yacht Idler at the New York Yacht Club.

I have seen him entertain a party of ladies and gentlemen upon it, for the entire forenoon as if he had not a care in the world beyond the comfort of his guests. And at one o’clock say nonchalantly: “Well good-bye, I must go ashore. I have a million dollars to pay before three o’clock. Have your sail out and don’t return until you are ready.”

The Tribune had other flattering things to say about Doc Durant, including that he worked as hard as a galley slave.

There were times he could not have told whether the next turn of the wheel would make him or lose him a million dollars but the great work never flagged.

When the Transcontinental Railroad was officially complete with the joining of Central Pacific and Union Pacific lines at Promontory Summit, Utah in 1869, Durant turned his attention east where he owned a substantial amount of land. In the 1860s forests cut over and abandoned by lumber companies in the Adirondack Mountains of New York State were being sold off at tax sales for a mere five cents an acre. Durant instructed his lawyers to attend the sales and managed to accumulate over ½ million acres. The land was tax free as long as Durant promised to build a railroad and make infrastructure improvements. But by the financial panic of 1873, an economic depression left Durant land rich and cash poor, and he was having a hard time finding investors.

He had other problems as well. In 1872 it came to light that while building the Transcontinental, Durant had set up a contracting firm called Crédit Mobilier to handle the construction, putting himself and his cronies in charge. Government investigators claimed that his company had over-charged the U.S. Government millions of dollars for building the Transcontinental. He somehow escaped prosecution but his reputation was severely tarnished.

When he finally called his family home from England to attend to business in the States, his son, William, who had never had to deal with his father’s tyranny growing up, was suddenly in his shadow. William recalls his father as autocratic and hard to work for, as the two attempted to build a railroad empire that would take people from New York City into the Adirondack interior and on to Canada.

They were successful in bringing a line from Saratoga to North Creek, NY but never to Canada and when Doc Durant died in 1885 he left his family without a will and creditors looking for their pay-out. There were several lawsuits against Doc Durant from former investors in both the Transcontinental and Adirondack Railway Company. William was left to unravel his father’s unscrupulous and tangled financial dealings as well as a railroad company in disrepair and major debt.

What the Adirondack Railway Company did have however was land, and lots of it. It was around this time that Collis P. Huntington, befriended his old enemy’s son, becoming a board member of the Adirondack Railway Company. His business acumen and advice must have been welcomed by William who never questioned Huntington’s motives. Using questionable business practices that would have made his father proud, William managed to sell off the Railway Company but keep most of the land. Ironically, Huntington’s influence over William may have led to his undoing. But in the end, it was William’s sister Ella who sued William for an accounting of the family fortune and brought to public light the family legacy of unscrupulous business dealings.

Find out more about the fictional lives of the Durants in the Durant Family Saga by Sheila Myers. 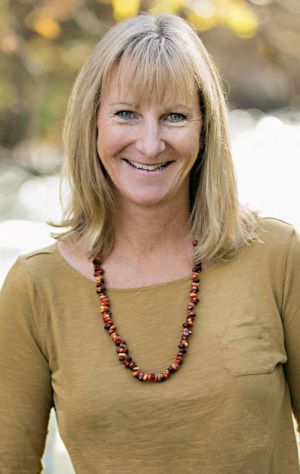 Sheila Myers is a Professor in Upstate New York and an award-winning author of four novels. When she’s not teaching, she spends her spare time writing and enjoying the outdoors. Her essays and short stories have appeared in the Adirondack Life Magazine, History News Network, Crossing Genres, and Women Writers Women’s Books blog.

Monday, April 20
Review at Passages to the Past

Monday, May 4
Interview at Passages to the Past

Wednesday, May 6
Review at Books and Zebras

– Giveaway ends at 11:59 pm EST on May 6th. You must be 18 or older to enter.
– Paperback giveaway is open to the US & UK only.
– Only one entry per household.
– All giveaway entrants agree to be honest and not cheat the systems; any suspicion of fraud will be decided upon by blog/site owner and the sponsor, and entrants may be disqualified at our discretion.
– The winner has 48 hours to claim prize or a new winner is chosen. 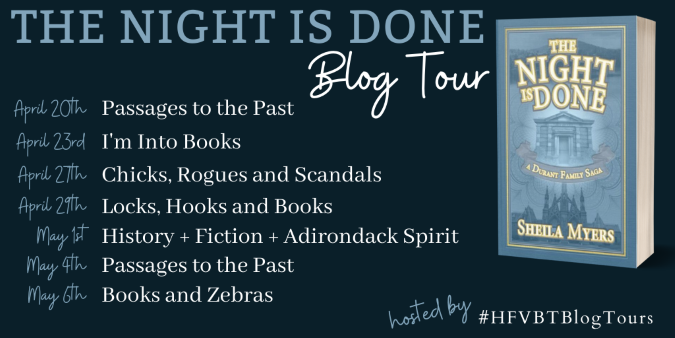