Hello Sunshines, I hope you are all safe and well?!  I have the absolute pleasure to be today’s stop on this amazing blog tour, for; Crimes and Survivors by Sarah Smith. Not only will I be sharing this gorgeous book with you all – one of which has gone stright onto my wish list, but I also have a fabulous guest post by Sarah for you all to tuck into. As Always, sit back grab that cuppa and enjoy!

Crimes and Survivors by Sarah Smith

It’s 1912. America. The land of Jim Crow, of lynchings and segregation. And a young society woman has just discovered that the grandfather she barely knows may be black.

She has a family. She has a child. If she’s black, her friends will deny they know her. Her marriage will be illegal. Her little boy will never be a full citizen of America.

She can’t be black. She’s experienced prejudice before. Never again. It will not happen to her or to anyone she loves.

She follows her grandfather onto the newest, safest, biggest ship in the world, to learn the truth. The right truth, the one that will save her family.

But after the iceberg, she finds the truth is far more complicated than black and white. More inspiring, more loving. Far more dangerous… And what she’ll need to find is not a convenient truth but a new America.

“The Titanic still cruises our imaginations…And she has secrets. Sarah Smith knows them and knows how to tell them in this riveting, page-turning novel, a tale unraveling from out of the ignorant past, through that terrible moment of truth on the Titanic, and on toward a hopeful future. Read it and be enthralled.” — WILLIAM MARTIN, New York Times bestselling author of Cape Cod and Bound for Gold:

“You may think you know everything there is to know about Titanic, but Sarah Smith’s ‘Crimes and Survivors’ carves out a space of its own—while, in the same breath, demarcating a huge swath of America’s history and painting a resonant vision of its future. The result is suspenseful, insightful, moving and highly recommended.” — LOUIS BAYARD, bestselling author of Courting Mr. Lincoln

“For those of us who have been hoping for a new tale of intrigue featuring Sarah Smith’s star-crossed couple Alexander Reisden and Perdita Halley, the wait is over! Smith’s new installment, Crimes and Survivors, takes readers aboard the Titanic and to Jim Crow-era America for a thrilling and romantic literary mystery that unflinchingly examines issues of race and identity, love and family, and the danger and beauty of uncovering long-hidden truths.” — SARAH STEWART TAYLOR, author of the Sweeney St. George mysteries and The Mountains Wild

“Come for the rich prose, meticulous research, and vibrant characters. Stay for the heart-stopping mystery. Sarah Smith’s fresh take on the doomed Titanic sailing is filled with twists and turns and will enthrall both new readers and longtime fans of the Vanished Child series!” — EDWIN HILL, Edgar and Agatha-nominated author of Little Comfort and The Missing Ones

Want to live a life of danger and adventure? Be a mixed-race woman in New York in 1912.

Want to live a life of danger, adventure, and incredible uncertainty? Be a woman who doesn’t know if she’s mixed-race or not.

This book actually didn’t start with the Titanic. I knew I wanted to write about the ship, but while I was planning the mystery, a character walked in and surprised me with a problem I’d never read about before.

This woman has always thought she’s white. She has a beloved husband, a little boy; she has a mother, brothers, sisters. They all think they’re white.

But she’s just found out that her grandfather, whom she barely knows, might be passing for white.

This is 1912, the period of Titanic—but also of Jim Crow. In most states in America, her marriage to a white husband would be illegal. She’s an aspiring concert pianist; she couldn’t play with most orchestras. She couldn’t stay in white hotels or eat at white restaurants. She could buy clothes at a white store but she couldn’t try them on beforehand, couldn’t even touch them.

She hasn’t even thought of places as “white”—they were just orchestras, hotels, restaurants. Now she could be excluded from them.

Who would want that?

She doesn’t even know she isn’t white.

She follows her grandfather on board Titanic to find out the truth from him—the right truth, the one that will save her family.

But after the iceberg—

There were three strategies people used to survive Titanic.

Some survivors behaved as though the wreck had never happened to them. Not even their families knew they’d been on Titanic. Too late for my Perdita and her family secret. The wrong person already knows.

Some were overwhelmed by it. Perdita refuses to be overwhelmed. For herself and her family, she wants an America where they can be equal to anyone.

Some mourned, but lived, and changed their lives. Rose deWitt Bukater gave up a life of privilege and embraced adventure. The real-life Renée Harris took over her husband’s business and became a Broadway producer. What does Perdita do? As she and her husband solve a mystery together, she agonizes over the right decision. But as she decides what she’ll do, what she has to do, she finds a whole new world within America.

What a privilege it’s been to visit that world. Jim Crow defined it only from the outside. It was (and is) a great American culture. Cheering for Jack Johnson. Singing at church. Second-lining at a funeral. The best black detective in emerging Harlem is part of it. So is his “traditionally built” female sidekick,who disguises herself as a cook. (Thank you to Barbara Neely’s Blanche White, one of my favorite detectives). In 1912 New York “downtown whites” hold “white-only” jobs in midtown and live as themselves uptown. Perdita’s friend Garnet Williams is a downtown white, who takes her life in her hands to become a fashion model. People pass from white to black, from black to white, and colonize the middle. In 1912 New York, multiculturalism and multiracialism are alive and well.

And what a delight to tour the rest of 1912 New York. The Waldorf-Astoria, in mourning for John Jacob Astor. The models at Macy’s weeping for the Strauses. The suffragettes, and the men (and women) who criticize them for taking space on the lifeboats. Survivors of Titanic at St. Vincent’s. The electric lights blinking and moving over Times Square. The Chelsea Piers, crowded with New Yorkers waiting to see the survivors. Leo Astor, the lion at the New York Public Library, wearing a great black mourning ribbon. The first of the Titanic disaster movies filming in New Jersey, with a “Titanic” moored in the Hudson and a Titanic survivor as heroine. An entire city, reeling from a disaster, thinking about survival.

We’re all thinking about survival now. We’ve struck an iceberg. Some people have died. Like on Titanic, too many of them are “essential workers.” In 1912 they kept the lights on and played music on deck. Now they nurse the sick and stock grocery shelves.

Others of us are in the lifeboats.

But, as one of my survivors says, it’s all one story. All one city. All one boat. And we’re all in it together.

Here’s what I know from writing about Titanic:

Surviving together is how we’ll all survive.

Stay well, friends, and thanks for reading.

Sarah Smith started telling stories as a child in Japan. Her sitter would tell her ghost stories at night, and the next morning she’d act them out on the school bus for an audience of terrified five-year-olds. Back in America, she lived in an unrestored Victorian house, where every morning she would help her grandmother haul coal and break sticks into kindling to light the household stove. She’s loved storytelling and history ever since.

She studied English at Harvard, where she spent Saturdays in the library reading mysteries, and film in London and Paris, where she sat next to Peter Cushing at a film show and got to pet Francis Bacon’s cat. While teaching English, she got interested in personal computers (she and two friends bought 3 of the first 5 PCs sold in Boston). She realized that software could help her plot bigger stories, and she’s never looked back.

Her bestselling series of Edwardian mysteries, starring Alexander von Reisden and Perdita Halley, has been published in 14 languages. Two of the books have been named New York Times Notable Books. The Vanished Child, the first book in the series, is being made into a musical in Canada. The fourth book in the Reisden-Perdita series, about the Titanic, will be published April 15, 2020. Crimes and Survivors. You can preorder it now from your favorite bookstore.

Sarah’s young adult ghost thriller, The Other Side of Dark, won both the Agatha (for best YA mystery of the year) and the Massachusetts Book Award for best YA book of the year. Her Chasing Shakespeares, a novel about the Shakespeare authorship, has been called “the best novel about the Bard since Nothing like the Sun” (Samuel R. Delany) and has been turned into a play.

Sarah lives in Boston with her family and not enough cats.

Do check out all the other brilliant blog’s participating in the blog tour.

Wednesday, April 15
Review at Passages to the Past

Friday, April 17
Review at Gwendalyn’s Books
Feature at What Is That Book About

Saturday, April 18
Review at Reading is My Remedy

Monday, April 27
Instagram Feature at Just a Girl and Her Books

Wednesday, April 29
Interview at Passages to the Past

– Giveaway ends at 11:59 pm EST on May 1st. You must be 18 or older to enter.
– Paperback giveaway is open to the US only.
– Only one entry per household.
– All giveaway entrants agree to be honest and not cheat the systems; any suspicion of fraud will be decided upon by blog/site owner and the sponsor, and entrants may be disqualified at our discretion.
– The winner has 48 hours to claim prize or a new winner is chosen. 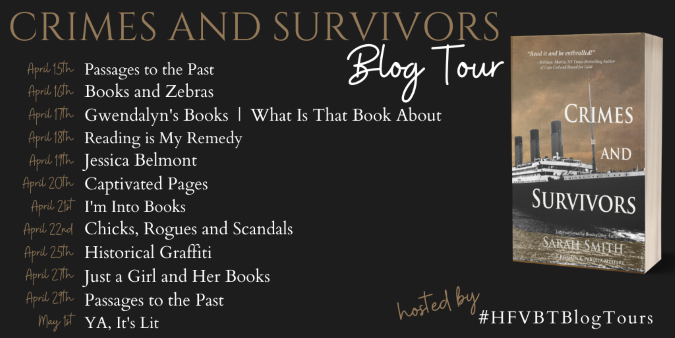