Hello Sunshines, I hope you are all safe and well?! I have the huge pleasure to be today’s stop on the amazing blog tour, and to be sharing my review for this gorgeous book; Witch of the Wild Beasts by Catherine Stine. So grab that cuppa, sit back and enjoy!

Witch of the Wild Beasts by Catherine Stine

When Evalina is imprisoned for witchcraft, will her supernatural bond with animals be her curse or salvation?

In 1854, Evalina Stowe witnesses the murder of her brother by Dr. Dowdrick, an enraged client at the tailor’s where they work. Desperate to stop him, she rouses a swarm of wasps that sting the doctor while she stabs him with scissors, and then flees. At a subsequent job when birds race to her defense, Evalina is declared a witch and sent to Philadelphia’s Eastern State Penitentiary.

While imprisoned, Evalina is horrified not only to learn that Dr. Dowdrick is still alive, but he’s experimenting on inmates. Determined to get inside his Eclectic Medical School, to expose his nefarious activities, she’s passionate about protecting fellow prisoners, especially Lewin, a child thief who knew her brother, and Birdy, a kind, resilient Welsh man serving time for a worker’s death while blasting granite for the railroad.

Evalina, her friends and her “wild beasts” work against time to unmask Dowdrick’s crimes when she participates with him in a symposium, showcasing Philadelphia’s premium doctors. If they fail, not only will the doctor’s evil deeds continue unchecked but Evalina and her crew will surely be hung. Actual historical figures such as Dr. Thomas Mutter and Charles Dickens spice up this fantastical thriller brimming with historical gems set in Philadelphia’s renowned penitentiary. Won a second place spot in The 2019 Valley Forge RWA Sheila contest.

My, oh, my, what a beautiful, memorable and highly engaging book, which swirls magic around the reader like a shimmering mist. I adored every moment of it; from the imaginative, classically gothic and engrossing plot to the compelling characters, each of which holds the reader’s attention, but none more than the leading lady; Evalina (Isn’t that the most beautiful name?) she really stole every scene, and solidly holds the intricate plot together.

I have to mention the cover, I know you should never judge a book by its cover but; isn’t it the most alluring and eye-catching cover, I love that gothic-ish look, it shouts that there is something very special within the pages.

Set in Philadelphia in 1854, working in a tailor shop along with her brother, Evalina is left to run the shop as the manager is more absent than present, it is during one of these times when the shop owner is absent that Evalina’s world crashes around her. Her whole life hangs in the blink of an eye, when a demanding, vile and narcissistic customer walks through the door only for one thing to lead to another customer; Dr Dowdrick murders Evalina’s brother, sending her into such a rage that she summons a swarm of wasps and in the midst of what turns out to a moment of buzzing hell she stabs the evil Dowdrick with a pair of scissors, leaving her running for her life.

Found herself caught and thrown into the notorious and squalid; Philadelphia’s Eastern State Penitentiary. On a charge of murder and witchcraft, and anyone who knows their history will know that Witchcraft alone could be a death sentence for any woman with or without a trial. Evalina soon uses her extraordinary powers and hones her skills for communicating and summoning small animals to her.

So, our Evalina is in real danger, but even more so when she learns that the very man she thought she had stabbed to death is actually alive and now experiments on inmates. I have to say that every time this horrible man is in a scene I get Goosebumps, he sends shivers of pure hate running down my spine, but that just proves what a brilliantly written book this is.

I won’t say too much, only will our lovely Evalina be able to free herself from the death sentence she has found herself in, and in the process reveal the injustice and evil that surround her and that prison.

Evalina Stowe is a fabulous character, a marvellous heroine who really captured the reader’s heart, you will be rooting for her all way through as she battles for what is right in the dark, murky and dangerous world she lives in.

I cannot say enough great things about this amazing book, it’s gripping and atmospheric, the historical detail is second to none, I loved the magical/paranormal element it really gives it a fresh and original hook that keeps you turning the pages. The writing is fluid and engaging, this is the first I have read by Catherine Stine and I thoroughly enjoyed stepping into her world and will definitely be reading more from her in the future.

Overall, a captivating and evocative book, the story flows with ease taking the reader on a vivid and tantalising journey, each character is brilliantly crafted whether they are the heroes or the villains each one brings something vital to the story. I cannot recommend this enough, anyone who loves an edgier historical will love this!

This was a complimentary copy via the author and HFVBT, which I voluntarily reviewed as a part of this blog tour.

Catherine Stine is a USA Today bestselling author of historical fantasy, paranormal romance, sci-fi thrillers and young adult fiction. She lives in Manhattan, grew up in Philadelphia and is known to roam the Catskills. Her most recent novel, Witch of the Wild Beasts won a second prize spot in the 2019 Valley Forge RWA Sheila Contest. Other novels have earned Indie Notable awards and New York Public Library Best Books for Teens. Before writing novels, she was a painter and children’s fabric designer. She’s a visual author when it comes to scenes, and she sees writing as painting with words. She loves edgy thrills, perhaps because her dad read Edgar Allen Poe tales to her as a child. Catherine loves spending time with her beagle Benny, writing about supernatural creatures, gardening on her deck, traveling and meeting readers at book fests.

Monday, April 6
Review at Passages to the Past

Tuesday, April 14
Guest Post at Passages to the Past

Tuesday, April 21
Review at Momfluenster
Review at 100 Pages a Day

Wednesday, April 22
Review at WTF Are You Reading?
Review at Foals, Fiction and Filigree
Review at Books In Their Natural Habitat

– Giveaway ends at 11:59 pm EST on April 22nd. You must be 18 or older to enter.
– Paperback giveaway is open to the US only.
– Only one entry per household.
– All giveaway entrants agree to be honest and not cheat the systems; any suspicion of fraud will be decided upon by blog/site owner and the sponsor, and entrants may be disqualified at our discretion.
– The winner has 48 hours to claim prize or a new winner is chosen. 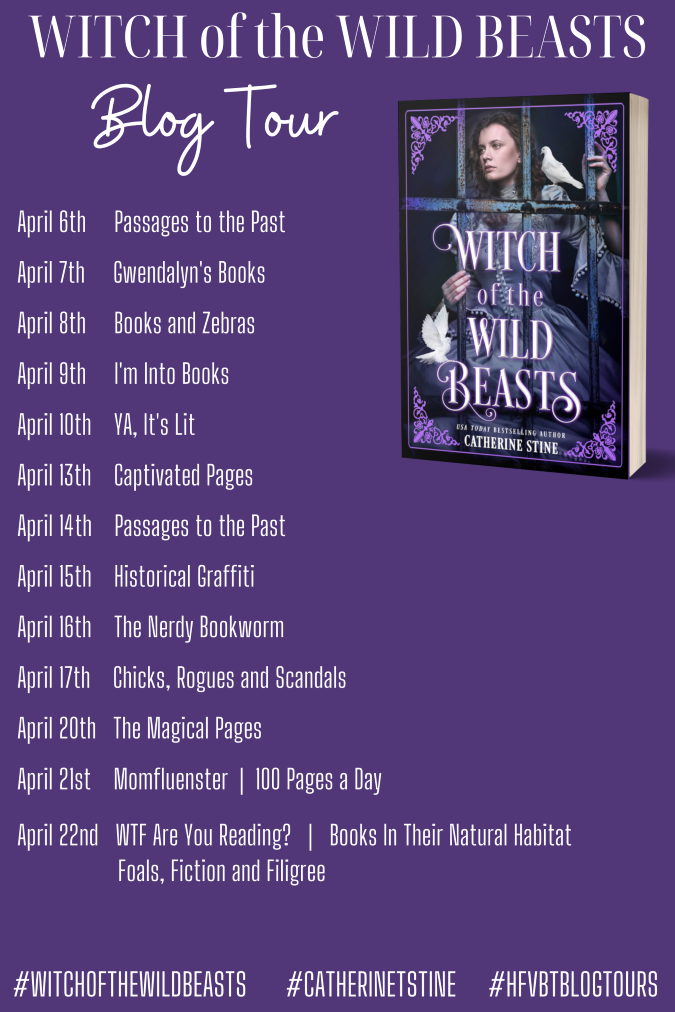