Hello, Sunshines on this cold topsy-turvy day! I have the huge pleasure to be today’s stop on this amazing blog tour for; The Will To Succeed by Christine Raafat. I can’t wait to share my review with you all, so settle back, grab a cuppa and enjoy!

When the 15-year-old Lady Anne Clifford’s father died in 1605, she was his sole surviving child and expected to inherit the Cliffords’ great northern estates. But the Earl of Cumberland leaves a will which ignores an ancient law and bequeaths the lands to his brother, in the belief that a prophecy by his great-grandfather will eventually come true and return the estates to Anne. She and her mother vow to contest the will.

Anne spends the next three decades battling for what she believes is rightfully hers. She risks everything by opposing her beloved husband, her family and friends, the nobility, the law courts, the Archbishop of Canterbury and the King. She steadfastly (and treasonably) refuses to accept the King’s decision, whatever the consequences, but is defeated and left with the prophecy as her only hope.

Widowed at thirty-four, she survives an anxious period alone with her two young daughters before surprising everyone with an ill-judged second marriage which gives her access to the highest in the land. But the Civil War destroys that power and confines the 52-year-old Anne to a grand palace in London for six years. Still convinced of her rights, will she ever attain “ye lands of mine inheritance”?

Well, what could I possibly say about this remarkable book that probably hasn’t been said a thousand times over during this blog tour? Engaging, intriguing, intelligent, and thought-provoking. A masterpiece of historical fiction that just happens to recount the true-life story of a woman who could have faded into obscurity and never known, yet because of her resilience, her all-out thirst for her rights, her determination to get what was rightfully hers and the fact that she was a keen journal writer, we know all about her and her fight for rights and her lands.

After the death of her father; the Earl of Cumberland, Anne thinks that she is to inherit the vast estates that are rightfully hers, but the old earl only went and changed his will and foregoes the old law saying Anne is the sole heir and instead names his brother as their heir. Anne and her mother become determined to gain back what is rightfully Anne’s and contest the will, something that Anne fights for the rest of her life. In her fight for her rights, she makes enemies, and she faces hard decisions and danger at every turn, life isn’t easy for Anne, but she is so courageous she never falters to keep going, and she never once thinks of giving up the fight. She really was a remarkable woman and through Christine Raafat’s expertly woven tale which exquisitely captors every nuance of the period, and captures the reader’s imagination with her vivid and accurate attention to detail, we get a real sense of just how extraordinary this woman was.

For someone who loves history, especially women’s history, I have to hang my head in shame that I had never heard of Anne Clifford before reading this book. What an amazing woman, a woman who I think had the mindset of someone centuries ahead of her time, she is exactly the sort of person that I love to read about; an advocate for woman and their rights, fighting men to gain her place and what is rightfully hers, she was fearless, she was headstrong and passionate about what she believed in and what she believed was right. Again, I am shocked that I had never heard of her before this book!

And what a book – this is historical fiction at its very best!

This was a complimentary copy via Bookollective which I voluntarily reviewed as a part of this blog tour, thank you, Ladies!

Christine Raafat grew up in the Eden Valley, in what was then Westmorland. An early fascination with Ancient Egypt led to an ambition to be an archaeologist; instead, she became a Clinical Psychologist and married an Egyptian Psychiatrist. Twins were born two years later.

She lived in East Sussex for over 20 years, working with children and families and published Parenting Skills in 1995.

Widowed and then retired, she took up painting and returned to Cumbria, but was later seduced by the fascination of words and published several magazine articles of local interest.

The Will to Succeed is her first novel, taking us back from the court of James I to the Eden Valley. 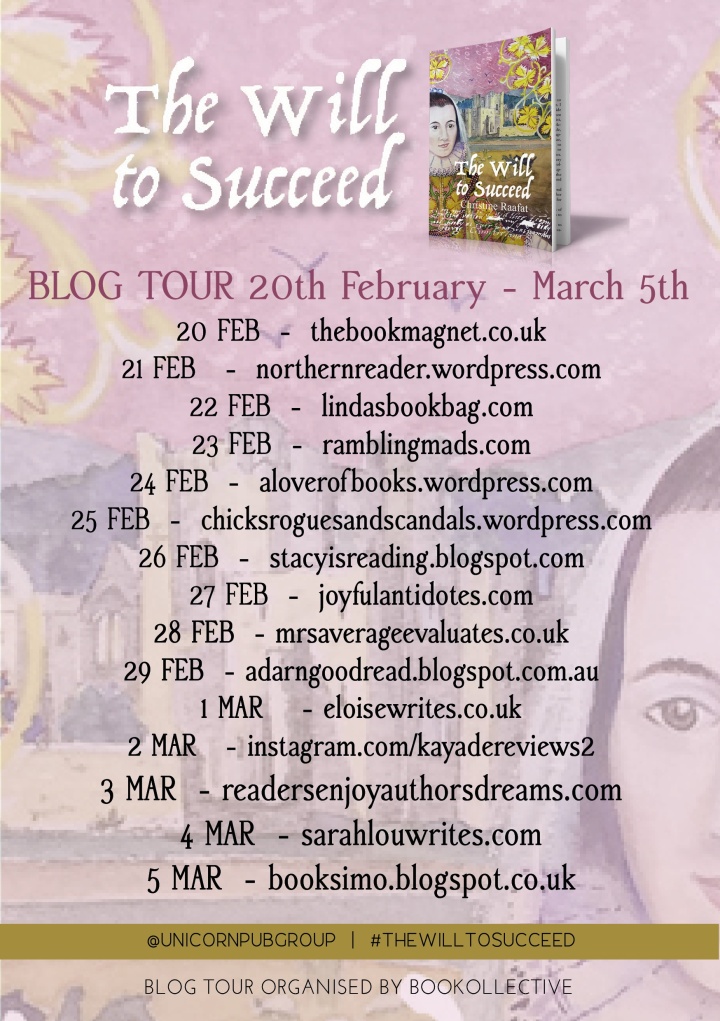