Hello, my festive little Sunshines! I have the huge pleasure to be sharing my review of this gorgeous book; his Countess for a Week by Sarah Mallory. This book is so wonderful ad I have been so looking forward to sharing my thoughts with you all, so settle in, grab that cuppa, plus a snack and enjoy! 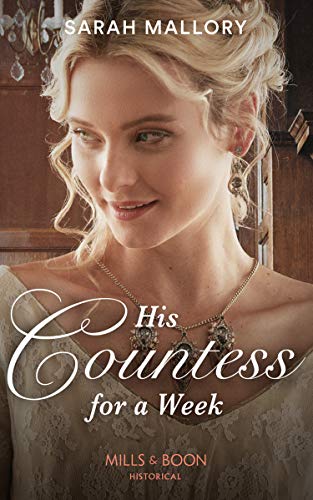 A pretend marriage to the Earl

To uncover a ruthless killer, Arabella Roffey masquerades as the Countess of Westray—never expecting her ‘husband’ suddenly to appear! He could expose her, but instead he agrees to continue her ruse for a week. Randolph is brooding, handsome, and Bella likes him more than she should. Pretending to be his wife, she shares everything with him—except a bed—but the temptation to do so is becoming all too real…

It’s always like opening a Christmas gift whenever I start a new Sarah Mallory book, you know it’s going to be a great love story, but because Sarah is such a dynamic and imaginative writer, you never know what sort of adventure you will go on, I have yet to be disappointed by the journey and this beautiful book is no different.

I am so pleased that Sarah wrote Ran’s story, the last time we met him he was a bit of a bad ‘un, yet as much as you wanted to dislike him, I really wanted him to redeem himself with a story of his own. I am over the moon that he gets his happily ever after too, but it’s not an easy journey for him, there are certain things that are associated with his past that does impede his way to happiness, and I thought his little flaw’s and vulnerabilities make him all the more lovable and fascinating.

After five years living in Sydney Cove after being transported for Murder, Randolph the newly named Earl of Westrey is now back on English soil and ready to finally step up and take responsibility for his life, he knows he did wrong and he is ready to be a man. He may not be comfortable with coming back with a title especially as a convicted criminal, but he has grown up a lot and ready to step up, but he is rather taken back that when he reaches one of the estates he now owns and finds a ‘wife’ already in residence. Well to say he is a tad shocked to discover a strange woman masquerading as his countess, but who is this mysterious and incredibly beautiful woman? And why on earth is she living in his home as the new Countess of Westray?

I love Ran – in fact, the word ‘love’ doesn’t really cover how much I adore this young, beautiful and charming man if I was a debutante from the regency era, I would have to pull out the virginal white feathered fan and begin to flutter it with gusto (I know, I’m a little long in the tooth to be classed as any kind of deb, but you get the idea) He is a complete surprise not at all how I thought him to be, he is really cheeky and enigmatic there is a smooth confidence about him that makes the heart a flutter around him, and yet hidden beneath that twinkly-eyed charm there is a fragility, a secret that could prevent his happiness.

After the death of her husband, Arabella rather scandalously masquerades as the Countess of Westray to infiltrate the coven of the group she thinks is behind the death of her husband. She had heard all about the new Lord Westray, she never thinks for a moment that the convicted criminal and new Westray will turn up at the same country house as her, but alas there he is large as life, impossibly handsome and full of surprises, for instead of exposing her as a fraud he remarkably decided goes go along with her charade.

Arabella is a really good woman she isn’t one for games and falsehoods, she is far too honest and caring for that, yet she will do all she can to find the truth about her husband. There are inner depths to Arabella, not just her need for justice and truth, but the more she uncovers the more she realises, that she has lived her life under an illusion as you will find out as you read, there is a deep sadness about her that I picked up from the moment I met her and I absolutely loved the way that without even trying Ran brings out the inner sparkle which she keeps hidden so well.

As they work together under the guise of man and wife, to uncover what happened to Arabella’s late husband, the chemistry between them is hard to resist and soon both are beginning to feel the pull of their desire for the other, but can they hold off their feelings and wade through the sexual tension that lingers in the atmosphere around them long enough to find out the truth?

I have to mention that ending, oh, my word!! Talk about edge of your seat, I was completely gripped by the intricate and daring finale, I absolutely refuse to give details (as always there will be no spoilers coming from me) but it’s a real doozy, it’s unexpected, thrilling, ridiculously romantic, the perfect ending for Ran and Arabella.

I loved every part of this; the story is not your stereotypical romance it’s original and I loved the edgier feel to it which pulls the reader in. Its full of tantalising banter, fabulous character’s are brilliantly written, Arabella and Ran are wonderful to get to know, they sizzle with tension, the atmosphere between them crackles with lust, each scene is like a battle of wills who will cave in and lunge at the other? I even love the baddie’s, they have such great personalities that you really love to hate them – there is one, in particular, that does make you want to boo and hiss whenever they appear.

This book has every thing you would ever want from a historical romance; history, two challenging characters, a coupe of villains, an explosive plot, a beautiful romance and it is all tied up with that unmistakable Sarah Mallory flare and style.

This was an Arc copy via the author, which I voluntarily reviewed, thank you Sarah! Xx

His Countess for a Week is to be released on 26 December and can be pre-ordered.