Hello, my festive little sunshines! I have the huge pleasure to be today’s stop on this brilliant blog tour for; The Viking’s Captive by Ingrid Hahn. Not only will I telling you all about this book, but I have an exclusive excerpt which I know you will make you want to rush out and grab a Viking – I mean a copy of this book 😉  So, settle in grab that cuppa and enjoy!

The Viking’s Captive by Ingrid Hahn

Thorvald Longsword can’t believe all he has to do is kidnap the daughter of his jarl’s enemy to get his land back. Easy. But when he finally snatches the princess up and tosses her over his shoulder, the beautiful spitfire makes him question his determination to get his land back at any cost.

Alodie gladly agrees to impersonate the princess so the bloodthirsty Northmen will take her instead. While Alodie might be ready to die for her people, she wasn’t prepared for how her pulse races for the maddeningly noble captor whom she’d just as soon hate.

“You may choose your own punishment.”

Her eyes narrowed. “Being near you is punishment enough. There. Are we finished?”

She raised her brows at him. “Pardon me?”

“It’s a punishment for me to be near you.” He stepped closer. His voice was raw and needy. “Torture. In ways you don’t even want to know about.”

Awareness stirred between them. All the things Thorvald had thought he could live without—around her, they became as vital as air.

Her voice lowered. “Nothing you can say will frighten me.”

“This would. But I think…I think you already know.” The admission was so close he could taste it.

“Sometimes things need to be said.”

It was what he needed to hear. “Don’t you see? I want to touch you and caress you and do things to you like I’ve never done to a woman before.”

She licked her bottom lip. “And yet you handed me over to him.”

“It was what I had to do.” Thorvald rubbed his brow and let out a heavy sigh. “I gave him my word—”

“It’s not an excuse.” There was a note of desperation in his voice that made him hate himself. It was like he was clinging to a thrashing beast that would kill him, yet he was still unable to release himself.

“Then you have no right to say these things to me.”

“I’ve wanted you for so long.” Now that he’d started, he couldn’t stop. “But while you were in thrall to me, I couldn’t touch you. Not because I knew you would ultimately belong to him—”

“I belong to nobody,” she snapped. “And you did touch me.”

She paced to one side of the room and lingered, her back to him. Neither spoke. Beyond the walls were the sounds of the food being enjoyed and laughter that would only grow louder as more ale was consumed.

“Is that your idea of punishment? Is that why you brought me here? Were you merely obeying him or did you think that you and I…we might…”

They were perilously close to speaking of something dangerous. Something forbidden. Something he wanted with all the dust in his bones. Did he dare?

He was a warrior. He’d been trained to tread into the unknown. Since his first summer as a man, he’d fought and felled bigger, heavier, stronger warriors than himself.

Being with her was different. What he said here didn’t threaten bodily harm. It threatened what was inside of him should she see how desperately he wanted her. If she saw, she could rip him apart and he’d never recover.

Oh, yes. He dared. If he remained silent, he’d never forgive himself. “I think about it constantly. You. Me. Everything a man and woman can have together, I think about that with us. More than you can probably begin to imagine.”

“But you still have to punish me.” Her voice was flat.

A tortured sigh escaped his lungs. “I still have to punish you.” 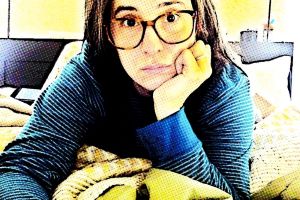 Ingrid Hahn is a failed administrative assistant with a B.A. in Art History. Her love of reading has turned her mortgage payment into a book storage fee, which makes her the friend who you never want to ask you for help moving. Though originally from Seattle, she now lives in the metropolitan DC area with her ship-nerd husband, small son, and four opinionated cats. When she’s not reading or writing, she loves knitting, theater, nature walks, travel, history, and is a hopelessly devoted fan of Jane Austen.

Friday, December 20
Excerpt at I’m All About Books
Feature at CelticLady’s Reviews

Thursday, December 26
Excerpt at What Is That Book About

During the Blog Tour, we are giving away a $10 Amazon Gift Card! To enter, please use the Gleam form here – The Viking’s Captive

– Giveaway ends at 11:59 pm EST on December 30th. You must be 18 or older to enter.
– Paperback giveaway is open to the US only.
– Only one entry per household.
– All giveaway entrants agree to be honest and not cheat the systems; any suspicion of fraud will be decided upon by blog/site owner and the sponsor, and entrants may be disqualified at our discretion.
– The winner has 48 hours to claim prize or a new winner is chosen. 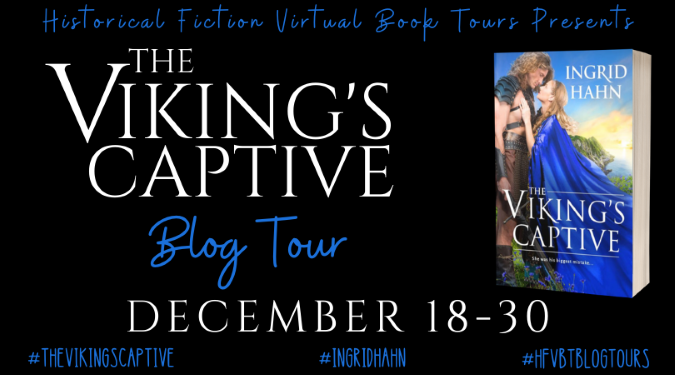