Hello, my lovely readers! I have the massive pleasure to be sharing my review of the incredible; Mrs Sommersby’s Second Chance by Laurie Benson. To say I have been excited about this book is an understatement and I am so pleased to say that this is a stunner…I may waffle on a wee bit, which I apologise for, so grab a cuppa and enjoy. 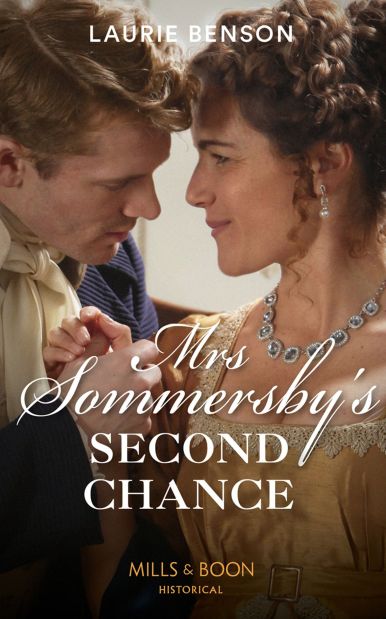 She’s played Cupid for others

Part of The Sommersby Brides. Widowed society matchmaker Mrs Clara Sommersby thinks handsome self-made businessman Mr William Lane is just the man for her neighbour’s overlooked daughter. He’s successful and confident, if somewhat emotionally distant, until suddenly—shockingly—his attention turns to Clara herself! She thought her days of romance were over but is this dashing younger man intent on giving her a second chance?

Well, what to say about this, other than; My goodness, I love it, its absolute perfection!!! This ladies and – I think there maybe some – gents, is how you write a Regency romance. Laurie Benson, I bow down to you!!

I will attempt to put my scattered thoughts in order and write a proper review without too mush gushing, long sighing pauses and over the top waffling, but really with this beauty I make no promises that I won’t just talk for an hour about how gorgeous Lane is and how brilliant Humphrey is when trying to hump a plant pot…you have to read it, but I think all us dog owners have been in Clara’s shoes a time or two. 😉

So, this is the final book **Sobs and sniffles** in what has been a wonderful series, I will admit that personally the previous book was a little hit and miss for me and I did feel bad about writing a not as glowing review, but i have vowed to be honest but apart from that i have absolutely adore this series. It has been such a joy to get to know the Sommersby ladies over the course of the four books, they have become a little like family now I have spent so much time with them and I am very say sad to let them go….I just don’t want to, surely there is more Sommersby’s out there somewhere?. Long lost cousins four times removed or something….hint, hint 😉

Anyhow, so this is book four and as i always say, you can very easily read this as a stand-a-lone as well as part of the series, but i do say start from the start and get to know all the characters. For me it has been Clara who has been the star of each one, there was always something about older woman that just caught my attention, she is brilliantly funny, independent and insightful. I was very happy when i heard that she was going to get a story of her own. It has been a wait, for someone who doesn’t even like to wait in queue in a shop then wait for Clara’s story was agony, but worth it, because this is a doozy!

Set in the beautiful city of Bath, self made man; William Lane is there doing research for his newest business idea, he is set to propose to his business partner a certain man called Hart, I’m sure others will recognise that gent. While there he is very reluctant to try out the famous healing waters, when he catches the twinkling eye of Mrs Clara Sommersby. He is instantly enthralled by the enigmatic woman – and let me just say that his thoughts aren’t exactly angelic, they do concern hot baths and glistening bare skin 😉 Clara takes a instant shine to the younger man, but obviously she doesn’t think of him in that way, she is far too ‘old’, for a start she has other things to occupy her mind, a bit of matchmaking. Her and good friend the Dowager Duchess of Lyonsdale start to match make Clara’s neighbours daughter; Harriett. Clara has an idea that a certain Mr Lane would be perfect for the younger, shy woman. The problem with that, is William Lane has his beady eye set on someone else completely; why would he want a shy little cub when he can have the lioness instead? I love how there is an instant attraction between Clara and Lane, their blossoming romance builds up in such a beautiful natural way, they are such an adorable couple who you just know are made for one and other.

William Lane, oh, William!! Could there be a more perfect (for me) hero? I don’t think it is a surprise that I find the self made, hard working man alluring. He didn’t have the best of starts in life, being raise in a Foundling Hospital, which by all accounts were just awful, some were no better then the workhouse. But, with true grit and determination to make something of himself, he pulled himself out of the gutter and now he is a business man in his own right, he has got the most brilliant mind, he see’s things in ways which others are just blind to. But there is a vulnerable part of him, the part that still sees the world from the Foundling Hospital, the part that stills believes he isn’t good enough. He is so self assured, so independent; so when he does need help from others -aristocrats especially – it does irk him. I can really relate to this man, everything about his character speaks to me, he is just a wonderful, honourable, loyal and gentle man. Who needs a title when you have a brain?

This book is such a joy to read, I love that our leading couple are older then your average Mills and Boon/Harlequin couple, as Lane is 37 and Clara 45, I found that to be such a refreshing change. Its about time and I do hope that this will the start of more stories with older leads, instead of all the young whipper-snappers – Hmmm, I sounded like my Gran there! Another aspect of this book that I love, is that it shows that having children are not crucial to have a happily ever after, that if anything in the book spoke volumes to me.

As ever the thing that I really picked up from this, as do from any of Ms Benson’s books; is her passion for the Regency era, you get a real sense that she genuinely adores this period of history, she pours her heart into creating a realistic, charming and expressive world for us all to fall into. Another thing that did catch my attention with this, is her subtle ways of incorporating all the senses, it really brings the story and the characters alive, you visualise everything in your mind as though you were sitting in Clara’s hotel garden with them smelling the roses. I love it!

Over all this is an enchanting, mesmerising and captivating love story that meticulously weaves solid historical details with a charming second chance romance. I honestly cannot recommend this more, there isn’t a single thing that I don’t like about this.

This was an Arc copy via the author in exchange for an honest review, thank you Laurie. x

Mrs Sommersby’s Second Chance is to be released on the 25th July and can be pre-ordered at Amazon.