Hello everyone! I have the great pleasure to be today’s stop on this wonderful blog tour for; Listen To The Wind by Susanne Dunlap. Let me tell you that I have a mammoth post for you all today; Not only will I be sharing my review of this splendid book, but I also have an exclusive guest post by Susanne for you all – and it is an amazing post and there is a chance to win a copy of Listen To The Wind. So without further ado, sit back and enjoy.

Listen to the Wind by Susanne Dunlap 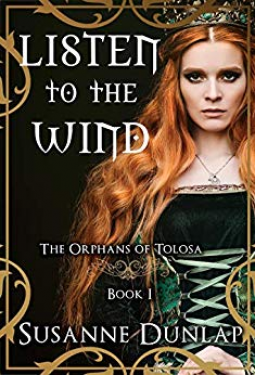 Sent away from their families for their own protection when they were very young, Azemar and Azalaïs become separated when they are forced to flee from the band of outlaws who served as their supposed protectors. Armed only with scraps of memories and the wits and intelligence that have helped them survive brutal conditions, they struggle to find each other again and discover the mysterious past that links them across distance and time. Who are they? And do they hold the secret of the legendary Cathar treasure? All they know is that knights and monks spell danger, and they must find a way to survive at all costs if they are to fulfil their destiny—and preserve their vanishing culture.

One of the best things about being a historical novelist is having the opportunity to delve deeply into a period and imagine the world as it was at that time. Perhaps that’s why to put in the months (or years) of researching and writing a historical novel I have to become completely passionate about my subject and my characters—real or invented.

Most of my novels have taken place in the modern world, from the 17th-20th centuries. But something about the world of thirteenth-century Languedoc caught me and simply wouldn’t let me go.

It all started in grad school. I was studying music history at Yale University, working toward a PhD, and loving every minute of the research and writing. When in the medieval seminar I found out about the women troubadours (trobairitz) of Languedoc in the 12th and 13th centuries, I was utterly intrigued. Apparently, all 20 of the trobairitz historians know of came from one small region of what is now southern France but was then its own patchwork of political entities and its own culture. They didn’t even speak French, but spoke what is now referred to as Old Occitan, and was then sometimes referred to as Lemon.

The troubadours and trobairitz wrote courtly poetry in very complex metrical forms. The subjects were love, of course, but in the case of the trobairitz, the love was decidedly earthly. They spoke of disappointments, of unrequited love, friendship, and passion—whereas the men tended to go in a more esoteric direction, making the object of their love poetry the idea of a lady rather than an actual living, breathing, woman.

So, I thought, these women who weren’t afraid, to be honest, must have been strong, intelligent, educated, and imaginative. What’s not to like?

Very little is known about the real lives of the trobairitz, so I found myself creating characters and a story that integrated the poetry and music, and captured the volatility of the period. Because trobairitz came from the educated upper classes, Jordane de la Moux d’Aniort, daughter of a baron, is the trobairitiz in Listen to the Wind.

The Orphans of Tolosa trilogy (of which Listen to the Wind is book one) takes place as the culture of the region is being crushed by the inquisition, which not only sought to eradicate the Cathar heretics, but to impose the legal systems of northern France and subsume the region into the territories ruled by the King of France.

Although the region is now fully part of France, a modern version of the language is still spoken, and the descendants of those fiercely independent people cling to their cultural heritage. In recognition of this heritage, what used to be known as Languedoc-Roussillon and Midi-Pyrenees is (as of 2016) now referred to as Occitanie, and if you visit there, you’ll see many street signs in both French and Occitan.

It is my hope that readers will not only be drawn into the adventures of the characters in Listen to the Wind but also appreciate the culture that inspired the story.

More historical tidbits and a glossary of Old Occitan terms featured in the book are at https://orphansoftolosa.com.

Well, what can I say about this book? Thrilling, engaging, illuminating and brilliantly entwined with the history and a wonderfully complex story. It takes you on a real adventure through 13th century France, the colourful writing makes every scene so beautifully detailed and vivid you can see it play out like a film in your mind.

I haven’t read any of Susanne Dunlap’s work before, but after reading this – or should that be; devoured – I will definitely be reading more, her writing is so imaginative and atmospheric that you become completely lost in the story and before you know it you have whiled away a full afternoon.

The story opens with siblings; Azalais and Azemar who are living in an orphanage in Tolosa, they live a happy simple life roaming around the woods and surrounding area, making up games with the other orphans abuts knights in shining armour and damsels in distress. Everything in their life is good, that is until an illness spreads throughout the area and the people who were supposed to be protecting them soon turn on them and the other orphans, thinking it is them that has caused all this illness and death. The children flee for their lives and in the melee Azalais and Azemar become separated, promising to meet up.

But, all doesn’t go to plan and what should have been a simple meeting each other again in the next town turns into years of uncertainty and adventure for our two youngsters. What at first, appears to be a very simple story of these two young people trying to forge their way through such hardships and attempting to find one other again, you soon realise that this is far more than that. There is an ethereal and magical quality to the story, that is both surprising and addictive to read. We soon see that there is more to these two than meets the eyes, they have secrets buried within them that even they don’t know and even though once they have separated and when they try to find their feet they are more intricately entwined to one and other than originally thought.

So when they meet again years later, which is an amazing and gorgeous scene their shared past and destined future soon becomes clear.

This is an intriguing and complex story with lots of secrets and lies interwoven within the character’s personal stories, it is charming, exciting and mesmerising. Ms Dunlap’s writing is wonderfully immersive and brilliantly atmospheric, there is a real starlight quality to this book which will grab any reader’s attention.

Definitely, a must-read, I cannot wait to see what comes next in this series.

This was a complimentary copy in exchange for an honest review as a part of this blog tour, thank you, Susanne and Amy.

Susanne Dunlap is the author of six works of historical fiction. Two are for adults (Emilie’s Voice and Liszt’s Kiss, both published by Touchstone books of Simon & Schuster). Four are for young adults (The Musician’s Daughter, Anastasia’s Secret, In the Shadow of the Lamp, and The Academie, published by Bloomsbury). A graduate of Smith College with a PhD in Music History from Yale University, Susanne grew up in Buffalo, New York and has lived in London, Brooklyn and Northampton, MA. She now lives in Northampton with her long-time partner, Charles, who has two grown daughters, three granddaughters, a grandson, a stepson and a stepdaughter, four step-grandsons and one step-granddaughter—that’s a total of four children and nine grandchildren!

In her spare time, she cycles in the beautiful Pioneer Valley.

Make sure you go back through the blog tour and check out all the blogs which have participated.

Monday, May 13
Review at Bibliophile Reviews

Tuesday, May 14
Review at Pursuing Stacie

Wednesday, May 15
Interview at Passages to the Past

Thursday, May 16
Review at Historical Fiction with Spirit

Friday, May 17
Review at Bookish Sarah
Review at Comet Readings
Feature at What Is That Book About

Monday, May 20
Review & Guest Post at Clarissa Reads it All
Excerpt at The Book Junkie Reads

Wednesday, May 22
Feature at Just One More Chapter

Friday, May 24
Review at Passages to the Past

Monday, May 27
Review at MacBooks
Feature at The Lit Bitch

Tuesday, May 28
Review at Coffee and Ink
Feature at CelticLady’s Reviews
Review & Guest Post at Chicks, Rogues and Scandals

– Giveaway ends at 11:59 pm EST on May 28th. You must be 18 or older to enter.
– Giveaway is open INTERNATIONALLY.
– Only one entry per household.
– All giveaway entrants agree to be honest and not cheat the systems; any suspect of fraud is decided upon by the blog/site owner and the sponsor, and entrants may be disqualified at our discretion.
– The winner has 48 hours to claim the prize or a new winner is chosen.