Hello, my lovely readers! I am very excited about sharing my review of this utterly gorgeous book, I have been avidly reading this series and was so excited to meet Sutton and Eilidh and it does not disappoint. So, without further ado grab yourself a cuppa and enjoy! 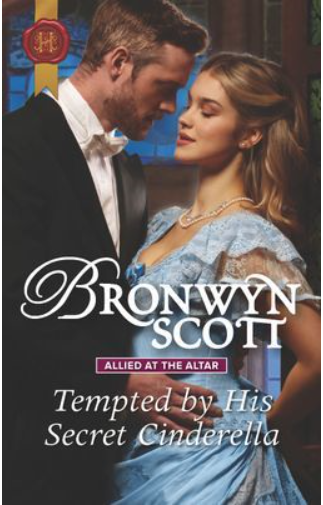 He’s falling for a princess…
But she’s a commoner!

An Allied at the Altar story: A madcap scheme to secure a patron for her father’s play finds Eilidh Easton at a house party, dressed as Italian royalty! But Eilidh catches the eye of their dashing host, Sutton Keynes, who has four weeks to find a noble bride. He’d never look twice at her normally – poor, plain and untitled – but at the moment, it’s easy to imagine they have a future!

My goodness, Bronwyn Scott you have gone and done it again! I am, as ever in complete awe at the excellence of this fine lady’s writing. I have been so excited about this book and it did not disappoint; Tempted By His Secret Cinderella blew me away, its stylish, seductive, intriguing and utterly romantic, honestly its perfect!

This is book three in the Allied At The Altar series, I cannot believe that we are on book three already, how can that be? It only seems like yesterday that I first opened the first book, this series is so engaging and that you literally just fly through book after book. A lot like devouring a full share bag of M&M’s, you keep reading then you want to weep when it comes to an end – I don’t want this series to end!! As with the previous two, Tempted By His Secret Cinderella can be read very easily as a stand-a-lone, as the series is linked together with specific characters which appear or are mentioned in each book when the story calls for them.

Sutton has been informed that if he is to inherit he must marry within four weeks, but not just marry anyone – oh, no! There are clauses that state very specially the type of women he is to marry, but also that they must stay together – well, I never! Sutton isn’t exactly averse to marrying, but he would rather it be on his own terms and that the lady be agreeable to him and his project. So he decides to host a house party where he can do proper ‘research’ on his prospective brides, but the one that catches his eyes isn’t on the list at all, the girl in the red dress fascinates him from the moment he sets eyes on her.

Elidh and her father are destitute, they are practically broke. Her little wage which she gets for sewing isn’t near enough to keep them going through the winter and her play write father hasn’t sold a play in so long, that Elidh is worried. Even more so when she hears of her fathers newest scheme. He plans to gate crash Sutton Keynes house party in the disguise of Italian royalty so that he can find a new patron for his latest play. No amount of persuading can change his mind so Elidh must done the mask of confident, stylish, sexy; Principessa Chiara and w her way into Suttons world and she is soon caught in the gaze of Sutton himself.

I really, really like Sutton, he is a man who knows his duty, he knows what he must do and he isn’t one to shirk that duty. He has loyalty to his family ingrained in him right down to the core, he is loyal and honest and just wants to do what’s right. But it’s the other side of his personality that caught my eye and drew me to him – like a moth to a flame, he is highly intelligent, he prefers science and fact over whimsical and the ton. He has a passionate side of him that willingness to work that is very seductive.

The instant chemistry between Elidh and Sutton just jumps off the page, it sizzles those little glances and touches that pass between them are wonderfully vivid that you can feel the tingles along with them. Even though Elidh is trying to be disinterested in him, she can’t deny that she – like the rest of us – is transfixed with the quiet and at times brooding Sutton.

I have been completely in love with this series from the beginning, the further we go along the better and better it gets. It takes the reader on a beautifully crafted journey as Sutton and Elidh traverse the great road towards their happily ever after.

I adore the premise of this, the Cinderella-esque storyline isn’t at all what you would think it to be, there is an imaginative twist to it. I really like how Ms Scott has gone deep into the reason why Sutton must marry within weeks to inherit, it is a brilliantly dark secondary storyline, one that is constantly present in the background throughout the story, it is the driving force of why Sutton does what he does.

Overall this is a magical love story; its enchanting and fun, as well as being highly addictive reading, its one of those will they, won’t they gripping romances that will have you turning the pages with lightning speed.

I cannot wait for the fourth and final…..weeps for ten minutes …..book in the series, I am eagerly awaiting that one!

This was an Arc copy via the author in exchange for an honest review, thank you Bronwyn.

Tempted By His Secret Cinderella is to be released on 30th May and can be pre-ordered now.