I have the very great pleasure to be apart of the exclusive cover reveal tour of A Modest Independence by the hugely talented Mimi Matthews. I cannot wait for you all to see this beautiful cover, it is simply stunning. As a massive Matthews fan, I am so excited about this book.

A Modest Independence
by Mimi Matthews

Attorney Tom Finchley has spent his life using his devious intellect to solve the problems of others. As for his own problems, they’re nothing that a bit of calculated vengeance can’t remedy. But that’s all over now. He’s finally ready to put the past behind him and settle down to a quiet, uncomplicated life. If only he could find an equally uncomplicated woman.

Former lady’s companion Jenny Holloway has just been given a modest independence. Now, all she wants is a bit of adventure. A chance to see the world and experience life far outside the restrictive limits of Victorian England. If she can discover the fate of the missing Earl of Castleton while she’s at it, so much the better.

From the gaslit streets of London to the lush tea gardens of colonial India, Jenny and Tom embark on an epic quest—and an equally epic romance. But even at the farthest edges of the British Empire, the past has a way of catching up with you…

Mimi Matthews (A Victorian Lady’s Guide to Fashion and Beauty, The Lost Letter) writes both historical non-fiction and traditional historical romances set in Victorian England. Her articles on nineteenth century history have been published on various academic and history sites, including the Victorian Web and the Journal of Victorian Culture, and are also syndicated weekly at BUST Magazine. In her other life, Mimi is an attorney. She resides in California with her family, which includes an Andalusian dressage horse, two Shelties, and two Siamese cats.

While your patiently await for the release of A Modest Independence, why not grab a copy of the first book in the Orphans of Devon series; The Matrimonial Advertisement at just 99 cents, in this Savvy Spring Sale. I can guarantee you won’t be disappointed, because this is brilliant. 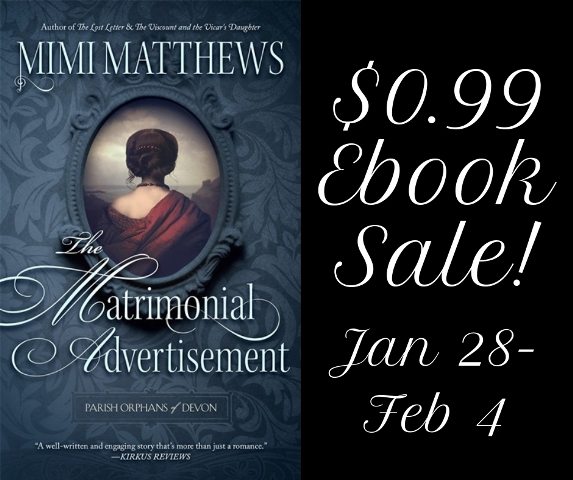 Don’t miss out on the rest of this fantastic book blast tour.

Monday, January 28
Bookish Rantings
Queen of Random
Passages to the Past
Chicks, Rogues, and Scandals

Wednesday, January 30
100 Pages a Day
A Chick Who Reads

Sunday, February 3
Clarissa Reads it All
The Book Junkie Reads