Happy Belated Burns Night – or should that be day? I never know! But, never mind me pondering over something that I presume isn’t really important let me carry on with this post. I was going to post this yesterday, when it was actually Burns Night, but as happens when your wanting to do something at that very minute your internet decides at that point it’s not playing and shuts out…Grrrr!! Anyone else have the same trouble? I’m sure it can’t just be me that has constant Internet/Wifi issue’s, but never the less I’m here now.

So what is Burns Night? I’ll give you a bit of a low down, from the perspective of a Sassanach – get what I did there? 😉 if your an Outlander fan you will. So Burns Night is a National Scottish grand supper which celebrates the life of Scotland’s very own Bard; Robert (Robbie/Rabbie) Burns, and is always held on or near the birthday of Robbie Burns of the 25th January – and from what I have gleamed from my research for this post, the day itself went through a bit of a transition as what people thought was Robbie Burns birthday actually wasn’t. People thought his birthday was the 29th January that is until someone found his birth record – which apparently was either lost or misplaced and was eventually found in the parish records and that gave the date as the 25th I always knew digging through old archives and parish records was a good thing. 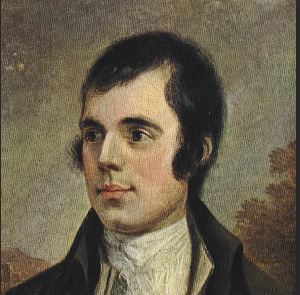 The very first Burns Night supper was on 21st July 1801, which was the fifth anniversary of Robbie Burns death and it was held In memoriam of Robbie in Burns Cottage attended by his close friends. Burns Suppers can either be formal affairs or informal – all dependant on who attending, I suppose. All will include Haggis, Scotch Whisky and recitations of Burns poetry. But one thing that does more or less stay the same whether a formal or informal ‘do’ is the supper running order of the night, each gathering will have key traditional elements.

A traditional Burns Night Supper usually follows the old running order, even though it does depend hugely on the gathering, a smaller more informal supper may not be as rich in historic traditions as the more formal gathering which I am sharing below. But that doesn’t mean a more informal Burns Night supper isn’t a great thing, because from what I can gather no matter which you attend you are going to have a brilliant night – I really need to get myself to a Burns Night Supper, because they sound amazing!

Piping In The Guests

A big Burns Night supper calls for a piper to welcome guests, at more formal events, the audience will always stand to welcome all arriving guests as the piper plays until the high table or hosts are ready to be seated, which will welcome a round of applause from the guests.

The Chairman/woman – Notice what I did there, why should it always be a Chair ‘man’?/ host or organiser will warmly welcome and introduce the assembled guests and the evening’s entertainment.

A short but important prayer will be read to welcome in the meal, The Selkirk Grace is also known as ‘Burns’s Grace at Kirkcudbright’. The prayer/poem is often printed in English, but will usually be recited in old Scottish Gailic. I am hearing Jamie Fraser’s Scottish burr at this very minute, and swoon!

Some hae meat and canna eat,

And some wad eat that want it,

But we hae meat and we can eat,

And sae the Lord be thankit.

Piping In The Haggis

I so love this part of the supper, and definitely think all of my food needs to be brought in on a silver platter accompanied with a piper – anyone else? Guests will normally stand to welcome the dinner’s star attraction, which will be delivered on a silver platter by a procession which will comprise the chef, the piper and the person who will address the Haggis. I love that; Address the haggis! A whisky-bearer will also arrive to ensure the toasts are well lubricated. During the procession, guests clap in time to the music until the Haggis reaches its destination at the high/hosts table. The music stops, everyone takes their seats and wait in anticipation of the address ‘To the Haggis’

Address To The Haggis

The honoured reader now seizes their moment of glory by offering a fluent and in some cases entertaining rendition of ‘To The Haggis’ The reader will have their knife poised at the ready then on cue cut the casing along its length, making sure to spill out some of the tasty gore within. It is now said that before the Haggis is piped in the chef or reader will make a tiny slit in the skin which will allow all the built up steam to escape as they have been cases of people becoming scalded with bits of Haggis juices and food by over enthusiastic reciters. Ad a trip to the first aid kit will definitely spoil all the fun. Again once the pipes have piped, the recital been read and the Haggis been sliced another round of an applause will go up before the meal starts.

Toast To The Haggis

The audience will then gather together and as one will make a toast to the haggis. They will all raise a glasses and shout: The haggis! Then it’s time to serve the main course with its traditional companions, neeps and tatties. In larger events, the piper again leads a procession carrying the opened haggis out to the kitchen for serving; and all the while the guests will clap as the procession departs.

Fair fa’ your honest, sonsie face,
Great chieftain o’ the puddin-race!
Aboon them a’ ye tak your place,
Painch, tripe, or thairm:
Weel are ye wordy o’ a grace
As lang’s my airm.

The groaning trencher there ye fill,
Your hurdies like a distant hill,
Your pin wad help to mend a mill
In time o’ need,
While thro’ your pores the dews distil
Like amber bead.

His knife see rustic Labour dicht,
An’ cut you up wi’ ready slicht,
Trenching your gushing entrails bricht,
Like ony ditch;
And then, O what a glorious sicht,
Warm-reekin, rich!

Then, horn for horn, they stretch an’ strive:
Deil tak the hindmaist! on they drive,
Till a’ their weel-swall’d kytes belyve,
Are bent like drums;
Then auld Guidman, maist like to rive,
“Bethankit” hums.

Is there that o’re his French ragout
Or olio that wad staw a sow,
Or fricassee wad mak her spew
Wi’ perfect scunner,
Looks down wi’ sneering, scornfu’ view
On sic a dinner?

Poor devil! see him ower his trash,
As feckless as a wither’d rash,
His spindle shank, a guid whip-lash,
His nieve a nit;
Thro’ bloody flood or field to dash,
O how unfit!

But mark the Rustic, haggis fed,
The trembling earth resounds his tread.
Clap in his wallie nieve a blade,
He’ll mak it whistle;
An’ legs an’ arms, an’ heads will sned,
Like taps o’ thristle.

Ye Pow’rs wha mak mankind your care,
And dish them out their bill o’ fare,
Auld Scotland wants nae skinkin ware
That jaups in luggies;
But, if ye wish her gratefu’ prayer,
Gie her a haggis! 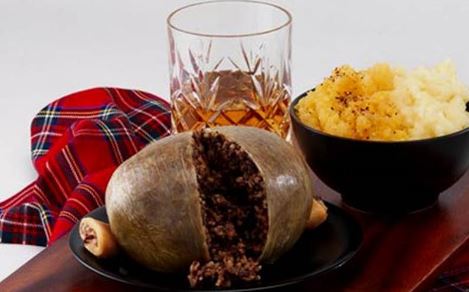 The meal will be served and then devoured while in the background music will play, not as though the music will be heard over the clamour of utensils on dishes and people talking and all out having a jolly good time. Or like me who once there is food in front of me you dive on it like a starving jackal, before anyone else gets it – or maybe that is just me, I never did say I was refined. The traditional meal will consist of the following:

Starter of traditional cock-a-leekie soup, which is followed by the Main course of Haggis, neeps & tatties. Then there is the Sweet course which consists of Clootie Dumpling (a pudding prepared in a linen cloth or cloot) or Typsy Laird (a Scottish sherry trifle). A Cheeseboard with bannocks (oatcakes) and tea/coffee follow.

Off course it is of no surprise that liberal lashings of wine/ale and whisky will be served with dinner and it’s often customary to douse the haggis with a splash of whisky sauce, which will be made with neat Whisky, no watered down trash for Burns Night.

The entertainment, just as with the whole meal itself is one of tradition, each part of the entertainment will follow a well laid out plan. Directly after tehe meal first entertainer will be a singer or musician performing Burns songs such as; My Luve is Like a Red Red Rose or Ae Fond Kiss, and Then We Sever. Alternatively the entertainers could recite one of Burns poems.

This part of the entertainment will see the keynote speaker take to the stage and deliver a oratoration on the life of Robert Burns. The speech usually has a touch of the serious; such as Robert Burns politics, life and religion but there will also be sparkling wit which will paint a picture of Scotland’s beloved Bard. At the finale of the speech the speaker will conclude with the toast; To the Immortal Memory of Robert Burns! 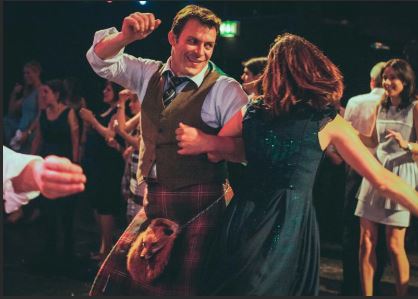 Toast to the Lassies

Once all the toasting of the Bard is done with, the next part og the entertainment is what people call the ‘humorous highlight of any Burns Night’ which is designed to praise the role of women in the world today. The toast will be given accompanied by a selective quotation from one Burns’s works and will always be in positive light towards the women, once the speech is done the speaker and men at the supper will toast the women, raising their glasses and say; To the Lassies! I love that part of the whole meal.

After a bit more speeches and dependant on whether the supper is formal or not, there will be a some traditional dancing – an all round shin-dig is called for at this point the supper will close with a rendition – if a slightly drunken rendition of Auld Lang Syne.

There you are, a brief look into the Burns Night Supper, I hope everyone who celebrated last night had a brilliant night, but before I go here is Jamie Frasier, for no other reason but how can I do a Burns Night/Scottish post without sharing a picture of one of the hottest thing’s that has come out of the Highlands?