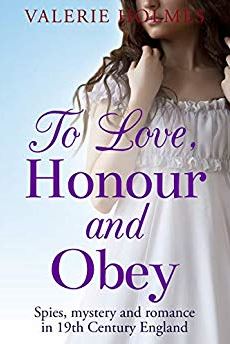 Regency England is under threat in this page-turning romantic adventure! For fans of Georgette Heyer, Mary Balogh, Jane Aiken Hodge and Jane Austen.

With Napoleon’s spies hidden all over England, no one can be trusted…1805, England

Six years ago, Willoughby Rossington’s father was murdered while searching for the head of a smuggling ring.
Taken under the wing of his uncle, who is running a counter-intelligence operation against Napoleon’s spies, Willoughby is assigned to take up his father’s last mission—and to avenge his death. He encounters a young serving woman, Beth, whose resilience against her master’s attempts to break her will strike a chord in him and he reluctantly takes her with him when he leaves town. But it soon becomes clear that they have a common enemy…

Their two lives become intertwined as they race against the villains that plot to destroy them both.
Will they uncover the truth behind the smuggling ring and find who is responsible for the death of Willoughby’s father? Can they stay safe as they continue to work their way deeper into the mystery? And, most importantly, will love conquer all? Or will duty and honour come between them?

TO LOVE, HONOUR AND OBEY is the first book in The Yorkshire Saga: a traditional British, Regency romance novel full of adventure and espionage, with a love story at its heart.

This is the first I have read by Valerie Holmes, and by this and how her writing instantly drew me into to her story I will definitely be reading more. I was instantly intrigued by the description it, it sounded fascinating. One thing that I will say is that even though it is labelled as a historical romance, I would say that it’s more historical fiction/suspense. Yes, there is a ‘will-they-won’t-they’ sub plot between the two lead character’s, but nothing really happens between them. I saw them more as friends which could then lead to something more, so please let that put you off reading this, as it has a great little historical suspense story which will definitely keep you hooked.

Willoughby Rossington is a secret agent who has been ordered to pose as a priest to uncover the corruption and smugglers of a little village in Yorkshire, a village which are a very close knit community and who have many secrets. Willoughby isn’t happy with this assignment he would much rather relinquish his role as a private agent and that of a priest and take a position in the military as he has always wanted. But more importantly for him, he wants to find out what happened to his father six years ago, who dies in very mysterious circumstances which Willoughby is positive that it was murder.

On his first day he meets a young bar maid called Beth who it appears may know more than she lets on and how is desperate to escape the evil clutches of her so called guardian, a horrific man who has taken advantage of the fact that Beth is an orphan, she is from the workhouse and he thinks it’s his god given right to rape and abuse her whenever he wants to. Honestly I have come across some cretinous characters, but this vile creature is awful. It is not surprising that because of her terrible start in life and how she has been treated she is distrusting of men and she sees herself as nothing more than something to be used that is until her guardian angle appears dressed as a priest.

Willoughby soon realises that his quest to find the truth of his fathers demise and his task in the village are connected and not only that could this young waif of a girl he has rescued be apart of this tangled scheme too? Only time and some ingenious investigating will solve all the mysteries that keep cropping up and this is what I really liked about Ms Holmes writing, she keeps the reader hooked with the various twists and turns throughout the story.

This is an intricately woven tale of secrets, lies, murder, smuggling and justice. The character’s are a delight to get to know and watch as they not only discover the truth but as they come in to their own. The plot is fun, fast paced and at times rather surprising story, and it was one that I thoroughly enjoyed submerging myself in. This is the first book in The Yorkshire Saga and I am looking forward to seeing what comes next. The only thing that I couldn’t get along with is the title, I don’t what it is about it, I think its the ‘Obey’ part that I can’t get along with.

A decent piece of historical fiction.

This was a complimentary copy via the publisher in exchange for an honest review, thank you Caoimhe!

To Love, Honour and Obey can be purchased from Amazon.