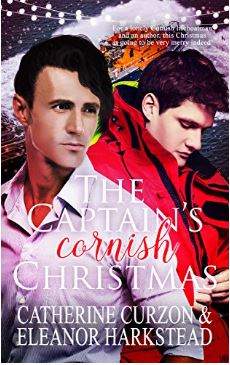 For a lonely Cornish lifeboatman and an author who’s more used to crime scenes than love scenes, this Christmas is going to be very merry indeed!

When Jago Treherne agrees to man the Polneath lifeboats one snowy Christmas, he knows he can forget turkey and all the trimmings.

Yet when he boards a seemingly empty yacht and stumbles upon sexy Sam Coryton enjoying an energetic afternoon below decks, Jago soon realizes that he might be unwrapping a very different sort of Christmas gift this year!

I always get very excited whenever a new ‘A Captivating Captains’ book is out, I have been avidly following this series from the very first book and I’m always giddy to see what is to come next. As always, I jumped at the chance to read this one, and as always I was not disappointed, not only is the cover gorgeous, but the story is pretty good too 😉

The Captains Cornish Christmas is a short novella, set in gorgeous Cornwall and revolves around the Captain of the Polneath lifeboats; Jago Treherne. What surprised me about this and what was different from the other’s in the series, is that instead of being split POV between the leads this story is told more through Jago’s perspective, which I found quite endearing especially as Jago is – for me, the star of the whole book and I really enjoyed seeing the story play out from Jago’s perspective.

Jago is spending this festive season on duty, he is manning the lifeboats and has no expectations of celebrating Christmas – except maybe at the end of his shift he will go home have a cuppa with his very spoilt cat; Peregrine – Isn’t that a great name? Yet when the weather begins to turn, he comes across the what looks like a yacht in trouble, which actually turns out to be the Morveren owned by best-selling author and child hood friend; Sam Coryton. Once on board he finds to his embarrassment that Sam isn’t in trouble at all – well only if he counts falling head over heels, crashing to the floor and ending up butt up on the floor with a black eye, which is very funny – he is in, shall we say a rather intimate position, that leaves poor Jago feeling rather hot under the collar and a tad embarrassed 😉 Sam has moved back to Polneath after becoming tired and a bit world-weary of London life and he is trying to escape a family Christmas. When ruggedly handsome Jago unceremoniously barges in on him, it is like a gift from the gods and he fully intends on making the most of his good fortune.

Jago is by far one of the most adorable character’s from the whole series, he is uncomfortable, shy and a tad lonely, plus not to mention his self-confidence issues. He believes that the glittery, handsome as hell and overly confident Sam would never look twice at an ordinary, gruff and rough around the edges, salty sea-dog like him. But that is where he is so wrong, from the moment when we first meet them you know instantly that there has only ever been one man for Sam, every other relationship has just been a stop-gap, he is the kind of man that he needs someone in his life.

What I love about this series is that each one is different, you don’t have to read them in any order as they are all stand-a-lone stories. Each one is as different as the next, every aspect of romance is covered so no matter what genre you read there will be something everyone will love.

The Captains Cornish Christmas is a charming, witty and sensual romance. The story progresses quickly right from the off there is a buzz about Jago and Sam. I love the difference in their personalities, Sam is far more relaxed and confident in his own skin whereas Jago is more reserved and shy, that is until they are behind closed doors, then he shows his hidden lusty side. The thing that I particularly love is the dialogue between Jago and Sam, they are very open with one another, there is no hidden agenda’s with them and at times it is wonderfully cheesy, plummy and very Cornish – courtesy of Jago, who actually reminds of the characters from the TV show Doc Martin.

Another winner, really these two wonderful ladies can do nothing wrong in my book, the writing is as always perfect and highly enjoyable. It’s sweet and sexy, with the best laugh out loud moment’s – the beginning on the yacht is a corker.

Highly recommended, I can’t wait to see what comes next.

This was an ARC via the authors in exchange for an honest review.

The Captains Cornish Christmas is to be released on 11th December and can be pre-ordered at Amazon.

A proud Yorkshire Lass, who is fond of a good cuppa and overly enthused with cake and biscuits.
Full-time carer and owned by my elderly dog.
Avid reader and reviewer of many genres especially romance and historicals.
A budding writer and passionate about history and 'Happily Ever Afters.