I have the great pleasure to be the next stop on this great Blog Tour and to share my review of Crikey! How Did That Happen? 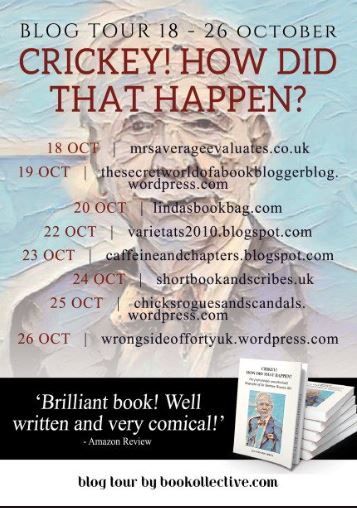 Up until now we have only known Bertie Wooster in his mid-twenties; this is his first whole life biography, told in ten short stories at seven year intervals. Thus we first meet Bertie aged seven, in 1907, at Malvern House prep school, then follow him to Eton aged fourteen and Oxford at twenty-one. We meet Jeeves when Bertie is twenty-eight and then they go their separate ways: Jeeves to the Royal Household at Buckingham Palace and Bertie to the French Riviera at its most glamorous, causing havoc with Somerset Maugham and Alfred Hitchcock, before being accidentally captured by the Italian fascists and spending Christmas Day 1942 with Mussolini.

After WWII Bertie resumes his career in musical cabaret, headlining the Royal Variety Performance in 1949, before being pitched into the machinations of Hollywood at its prime in 1956. In 1963, Bertie, caught up in the zeitgeist, finds himself in the Himalayas with the Maharishi and then we say goodbye to a very much alive Sir Bertram in 1970 in Mustique, where he becomes involved in a murder mystery with many of the leading tax exiles and celebrities of the day

I will admit that when I first got asked to be apart of this blog tour I did think very carefully about it before I said yes, this isn’t usually the type of book that I would usually pick up and I will admit that before reading this I didn’t really know who Bertram Wooster was. But I am always willing to give a book chance, after all a change is as good as a rest, right? I came into this book with completely open eyes, not knowing what to expect, and you know what I was pleasantly surprised at just how much I enjoyed reading it.

I first thought that this would a story that spanned over the decades, which it isn’t as such, this is complied of ten short stories that span between 1907 and 1970 where we see Bertram grow from a likeable young lad to the best valet and then on to being a married man. Each part of Bertram’s life enjoyable and has a certain vividness that captures the readers attention and imagination. For those like myself who was a tad ignorant of who Bertram Wooster was this will read as an entertaining story of a young man who went from being an orphan to entering a world of the rich and famous.

There is a great deal of seriousness to it, but that is expertly lightened by the authors wit and skilful play with words that keeps the reader turning the pages. Crikey! How Did That Happen? Is a fun, refreshingly original book that will take you on an adventure as well as having you laugh out loud while reading – yes, that did happen and I did receive some odd looks from the family. If you are like I was and unsure if this book is for you, then I say give it a go it will surprise you.

This is a surprising fun and enjoyable book, very recommended!

This was a ARC copy via the Ladies from Bookollective as apart of this blog tour in exchange for an honest review.