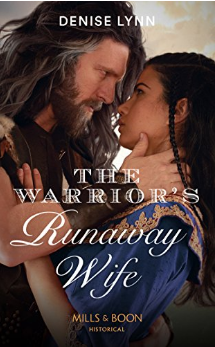 The notorious Lord of Roul…

…must take her as his bride!

Lady Avelyn flees an unwanted betrothal to an elderly warlord only to be hunted down and returned to King David’s court by fearsome Elrik, Lord of Roul, a legendary warrior with a heart of ice—and a kiss of fire. And now Avelyn is bound to Elrik—and his bed—when Elrik is commanded to wed her instead!

Wow! Firstly, If I rated book’s, which I don’t this would be way, way over five stars!

What a wonderful introduction to a new to me author’s work, this is the first book I have read by Denise Lynn and I can say without a doubt, it will not be the last. My goodness me this is good, I do love Medieval Romance, there is something tantalizing and raw about this era that instantly grasps hold of your attention and this is no different.

After her mother died, she was taken in by her Lordly father who has arranged for her to be wed to an aged warlord. Avelyn flees this very much unwanted betrothal, she thinks if she can get to France she will be safe. She is followed by unknown men and is eventually found by a green-eyed devil, who she instantly feels a raw connection with, even though this man is taking her back to be bartered off like a piece of bread.

Avelyn may like to act the confident young woman who likes to think for herself and she is an intelligent, feisty and strong woman in her own way. But I think that after all she has been through she is a naive, scared little thing. She has lost all faith and trust in all men, she is instantly on guard around Elrik but because of his calming and patient persona she soon realises that, this man is different.

Elrik; Lord of Roul has been forced to become King David’s notorious and brutal Wolf, to atone for the sins of his father who after being caught in a treasonous act had his life spared by King David under the condition that Elrik became his warrior. So along with his closest childhood friends; Samuel and Faulk – who are the only men Elrik trust’s he became the dark, dangerous and deadly Wolf.

He is an expert tracker, he has this rare skill to be able to find anything or anyone, which is why King David sends in in search of runaway Avelyn. If anyone can find the lass, it’s Elrik. What our hero doesn’t plan on though is that King David is a canny and calculating man and he has plans for them. A plan that not only will solve the problems that is circulating around them but will benefit all – especially the King.

Elrik has a lot of issues from being reluctant to marry again after what happened him during his first marriage (really, what was his first wife thinking?) to holding on to a decades long grudge for none other than Avelyn’s father. Because of the treasonous act that resulted in him being who he is, he will never forgive, that grudge and prejudice means that Elrik has hardened his heart off towards her. He doesn’t want to like her – and yet, he can’t help himself.

I love the instant chemistry between Avelyn and Elrik, the first time they meet is so sexy. It’s like something out of Outlander, he threatens to pick her up and throw her over his shoulder, she says no so he does it anyway. These two even though there is a real trust issue between them, they are so good for each other.

She brings lightness, laughter and the kindness his poor wounded warrior’s heart need’s, even though it takes time for him to trust her his built in, urge to protect her with his life is constant. Whereas he is the steady warm rock she needs in her lonely, scared life. He is the proof that men aren’t always abusive, manipulative brutes that she has always thought, they bring joy to one and other and I absolutely love how Ms Lynn has portrayed each of their own personal mis-giving’s.

I do have a real fondness for a green-eyed, dark-haired rogue, and Elrik is something very special. My goodness me, he is a sexy as hell man, brutishly handsome…. Swooning! He has a charisma that can make any woman go weak at the knee’s, this man is pure sexual masculinity! He did what he thought was right for his father, he cares deeply for those he loves and if you are privileged enough to warrant that love, you are a very lucky person indeed. Everyone think’s him to be a cold, ruthless and brutally dangerous man, but I see a protective, smooth and genuine man who can charm the birds from the tree’s.

I love this book! I really cannot say enough good thing’s about it, everything about this is perfect from the fast and engaging storyline, to the well-defined and completely likable character’s. The fast and witty banter between Elrik and Avelyn is romantic and laugh out loud, it is articulate and flows seamlessly from one beautifully crafted scene to the next. Ms Lynn is a wonderfully talented writer, she keeps you engrossed in the story with her stylish way with words and I cannot recommend this enough.

This is an amazing and highly recommended story, that will be loved by all romance readers.

This was an ARC copy via the author in exchange for an honest review.

The Warriors Runaway Wife is to be released on 28th June and can be pre-ordered at Amazon.