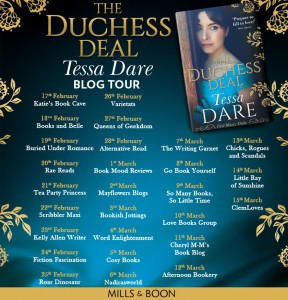 Praise for The Duchess Deal

‘This book is funny, it’s charming, and the romance works so beautifully.’
Smart Bitches, Trashy Books

‘A rollicking and passionate romp that is just what… fans will relish.’
Library Journal

I am a Duke. I’m not asking you to marry me. I am offering to marry you. It’s a different thing entirely.’

When the Duke of Ashbury returns from war scarred, he realises he needs an heir – which means he needs a wife! When Emma Gladstone, a vicar’s daughter turned seamstress visits wearing a wedding dress, he decides on the spot that she’ll do.

His terms are simple:
– They will be husband and wife by night only.
– No lights, no kissing.
– No questions about his battle scars.
– Last, and most importantly… Once she’s pregnant with his heir, they need never share a bed again.

But Emma is no pushover. She has secrets and some rules of her own:
– They will have dinner together every evening.
– With conversation.
– And teasing.
– Last, and most importantly… Once she’s seen the man beneath the scars, he can’t stop her from falling in love…

This is just gorgeous! I have been a fan of Ms Dare’s work for a while now, so I knew even before I picked this up that I was going to be in for a treat, and oh, boy! What a treat! This is laced with every emotion that you can think of, it is a ‘Marriage of Convenience’ both characters never went into this marriage with love in their minds they both wanted something from it, he an heir and she to help. But it becomes so much more than that, you know that as soon as the story opens that there is something very special going to happen with these two and there does. It is as ever so beautifully written, it’s full of angst and the story builds and builds just as the sexual tension between them does until it comes to a too romantic to be the true climax. Tessa Dare has a real skill with writing wounded characters that make you all in love with them and this is by far one of her best.

Seamstress Emma Gladstone is on the brink of destitution, her rent is due, and she knows that this time if she can’t pay she will be on the streets. She is desperate she will never go home and beg too much has happened for her to do that – there are too many skeletons in her dark closet, so she does the only thing she can to get the money she needs. Donning the wedding dress, she had been charged to make – the very dress that after hours and hours of pain and expense to make hasn’t been paid for – she goes and bangs on the door of the man whose bill it is to settle; the mighty Duke of Ashbury! But, the Duke has other ideas instead of settling up like a gentleman he gives her a choice – the full amount of what she is owed, there and then in cash or she marries him!

Emma can’t quite believe that he has asked her such a thing, and more than that is adamant that she will accept him. Especially when he turns up at her work – that is such a great scene – actually braving the outside world to come to her and basically tell her that she will be marrying him. Due to personal reasons, not just the fact that she is desperate but also the fact that by marrying the Duke she can help a good friend to avoid scandal, she does marry him – but after he has given her his own conditions of what would happen in their marriage, she presents him with her own conditions.

Conditions to their marriage not only shock her by confessing her deepest wishes to him but also shocks him too that she isn’t as pliable as he first thought her to be.

Ash is needing an heir, he knows that he has to have an heir otherwise his title would pass on to another branch of the family – one he was determined that wouldn’t have his title. So when he first sets eyes on Emma, he is on the verge of asking his man of business to make arrangements to find him a bride when the unbelievably beautiful and proud to a fault woman barges into his office demanding a measly sum of money for a grotesque dress, he knows there and then that he has found his Duchess she is exactly what he needs. She is young, healthy and more importantly, she is right there. He knows deep down she will accept him, how could she not? After all, she needs money and he is a Duke, but he is quite taken back when she does accept him …but with conditions of her own!

Ash is such a fragile man, since he came back from the war severely scarred he has become a sort of recluse, he is ashamed of his appearance he thoroughly believes that no woman would ever love a ‘beast’ of a man like him, so he keeps himself locked up in his big house, becoming more and more depressed. I do like a vulnerable man and Ash is the epitome of vulnerability, he is a brooding hunk of a man that does really need some goodness in his life, he needs to feel loved and he needs to be treated like the good and sensual man we all know he is. This is where the kind, patient and strong Emma comes in, she is exactly what he needs – whether he knows it or not!

I absolutely love the very first scene, when Emma turns up at the Duke’s house wearing a wedding dress she has made for his latest lady and demanding payment for it. In that first introduction to Emma, you see a strong woman who won’t take no for an answer she is determined, somewhat stubborn, she has got just as much pride as him and she has no intention of leaving his house without paying for the hour’s and hours work she has done on this dress. He pushes and pushes her as he does with everyone, but this little seamstress is unnerved by his demanding presence she, is determined not to be refused. For me, those first few pages, that one scene when they meet shows you exactly what these two are about. You know instantly that under both their too proud and business-like exteriors there are wounded hearts that need love and that love is standing right there in front of them. It is a terrific intro to both of them and gives way to so much more.

I love this, it’s so romantic and it is a hugely satisfying read. The plot is a simple ‘Marriage of Convenience’ trope where the hero and heroine after a bit of a to-ing and fro-ing finally get their HEA, but for me what really makes this is Emma and Ash’s budding relationship from the very first moment we meet them you just know that there is something special with these two, the way she brings him back from his dark place and makes him live again is really beautifully done.

I cannot recommend this enough, it is definitely a must-read and one that will be read and re-read over and over again.

The Duchess Deal is out now and can be purchased at Amazon. (Links above)

This was a complimentary cop via Mills and Boon as a part of this blog tour in exchange for an honest review.

Emma jumped in her skin and crumpled the sketches into her pocket. “We’re closed.”

With a sigh, Emma went to the front of the shop. She turned the key in the lock and opened

the door just an inch.

She found herself pushed aside as a man bulled his way through the door. He wore a dark

cape and a tall hat with its brim pulled low, concealing most of his face—but

she knew him at once. Only one man would have behaved in such a presumptuous manner.

The Duke of Ashbury.

“Miss Gladstone.” He inclined his head in the slightest possible nod. “I told you we’d meet

Emma closed the door and turned the key. There was nothing else to do for the moment. She couldn’t leave it ajar and risk being seen alone with a gentleman.

“Your Grace, I can’t admit visitors after hours.”

“I’m not a visitor. I’m a customer.” He strolled around the darkened shop, prodding a headless dressmaking form with his walking stick. “I need a new waistcoat.”

“What does it matter?” He made an annoyed gesture. “For a particularly ugly woman, approximately my size.”

Good heavens, what could this man be after? Was his mockery yesterday not enough to satisfy him? He couldn’t actually want to retrieve Miss Worthing’s gown.

Whatever his aim, Emma meant to exact a price in return. Today, he was welcome to share

pinned—and waved him toward it. “Up you go, then.”

He stared at her.

“If your very ugly, duke-sized friend wants a gown, I will need measurements. Sleeve, torso,

hem.” She arched an eyebrow. “Bosom.”

There. Surely he would retreat from that.

Instead, the unscarred corner of his mouth tipped with amusement. He set his walking stick

aside. He removed his hat. Then his cloak. Next his gloves. And, finally, his topcoat. Without

breaking her gaze, he stepped onto the box and lifted his arms to either side, palms up. Like an

actor on a stage, expecting applause.

Emma retrieved her measuring tape. She’d begun this little farce, and she couldn’t back down from it.

Tessa Dare is the New York Times and the USA Today bestselling author of fourteen historical romance novels and five novellas. Her books have won numerous accolades, including Romance Writers of America’s prestigious RITA® award (twice) and the RT Book Reviews Seal of Excellence. Booklist magazine named her one of the “new stars of historical romance,” and her books have been contracted for translation in more than a dozen languages.

Mixing wit, sensuality, and emotion, Tessa writes Regency-set romance novels that feel relatable to modern readers. With her bestselling “Spindle Cove” and “Castles Ever After” series, she has had great fun creating heroines who defy the conventions of their time—engaging in “unladylike” pursuits that range from palaeontology to beer-making—and dreaming up the strong-willed, sexy heroes who find their hearts ensnared by them.

A librarian by training and a booklover at heart, Tessa makes her home in Southern California, where she lives with her husband, their two children, and a trio of cosmic kitties.