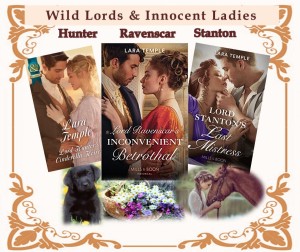 Three wild rakes whose seductive charms and aristocratic titles have the ladies of the ton swooning behind their fans. United by their charitable foundation to help those effected by the war, these lords are the firmest of friend’s.

But they guard their hardened heart’s almost as closely as they do their riches…that’s is, until they encounter here very special women.

Could these innocent ladies be the ones to tame these wild lords one and for all? 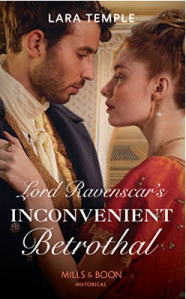 “Women either ran from Lord Ravenscar or ran to him.”

Alan Rothwell, Marquess of Ravenscar, is furious when unconventional heiress Lily Wallace refuses him purchase of her property. He can’t even win her over with his infamous charm. But when fever seizes him and they’re trapped together, horrified, Alan realizes Lily’s attentions will compromise them both! His solution: take Lily as his betrothed before desire consumes them completely…

This is book two in was has fast become one of my favourite series; The Wild Lords and Innocent Ladies Series, this series is just amazing I have been hooked by it since reading book one; Lord Hunter’s Cinderella Heiress which grabbed my attention. The three lords Hunter, Ravenscar and Stanton are three of the most eye-catchingly sexy and golden hearted men you will ever meet, and I have been looking forward to reading Raven’s story since meeting him in the previous and all I can say it was well worth the wait. He and Lily are such a beautiful and remarkable couple.

Alan Rothewell – or Raven – is on a mission, he needs to find another house which can be used in the same way as Hope House; which is a bit of a rest home/help house for veteran’s who are in need. Because of an incident with his previous house he needs a new one and he finds the perfect property that would fit the job perfectly; Hollywell Cottage, all Raven needs is to persuade the new owner to sell it him – all before his grandmother finds out that he has returned to the village where he grew up. But he soon finds that the new owner isn’t going to be as accommodating as he initial thought especially when said owner is threatening to take off Raven’s head with a medieval spear. Raven cannot believe that the fiery – if in his view deluded – young red head is now the owner of the cottage, he tries all the tricks that he can muster to get the spilt heiress on side, but nothing works unbelievably this odd creature is immune to his charm.

He wasn’t used to being treated with such cavalier insouciance; Rakehell Raven usually caused a much more gratifying response. Women either ran from him or ran to him, they rarely held their ground…

…did she really think that mace would do an ounce of good against him?…

Heiress Lily Wallace want’s nothing to do with the man everyone calls ‘Rakehell Raven’ with living with his grandmother and his sister until she finds her feet she has heard all about the charming rogue. She knows first hand what men like him want and there is no way he is going to get that from her and she knows that if someone like him ever gets their hand s on Holly well it will be turned into some sort of brothel and from past experiences with that side of life she isn’t going to let that happen. Beside she has full intention to be living there herself, she doesn’t want to do what society bids her to do and marry -which would be giving up her freedom. No, that is not going to happen. So, when ‘Rakehell Raven’ turns up she is more than happy to say no to him.

But when Raven falls seriously ill she has no choice but to look after him, she thinks more of his welfare and the fact that the handsome as sin man with the sad eyes will die if she doesn’t help him then her reputation. As they are stuck completely alone together as she nurses back to health they soon learn that their first impressions of one another are not exactly accurate, she isn’t at selfish and spoilt she has got and independent stubborn streak that can reveal his own and he isn’t at all the rake that his reputation proceeds him to be, especially when they become betrothed to protect her reputation.

“If I were halfway a gentleman, I would point out that you shouldn’t be alone with me in a bedroom. Grim is not an adequate chaperone…”

Raven is such a complex man he has got so much buried in his past that he tries to keep at the back of his mind, he has got shadows lurking in every corner. He hasn’t had the best of starts after the death of his parent’s he and his sister were sent to live with their grandparent’s only for one thing to led to another and his grandmother ending up disowning him. To me Raven isn’t your stereotypical aristocrat, he has trued to distance himself from that as much as possible never really fitting in or being accepted that is until he joined the army and later when he met Hunter and Stanton. You can see just how much those two men mean to Raven, with Hunter and Stanton and their work with Hope House he has finally found something that he hadn’t thought he could ever have.

Lily understands him so much more than anyone else, she has been through her own trials and sadness, he carries around with him so much self-loathing and guilt that it took a very special woman to be able to tackle that part of him and Lily is just the woman for him, Temple has done a wonderful job at pairing these two together.

I particularly like the addition of Grim; Raven’s huge black dog, and the story behind how Temple came to put this lovable canine into to the story – all to do with dogs guarding graveyards, it is fascinating.

This series is just fabulous, it is getting better and better as we go along, the underlining story that connects these books is one of moving on and finding peace and second chances. Now I do love stories where veterans feature where the story really show case those that have served, that have done their duty and come home and once home that is where the real hard work starts. Temple for me is the go to girl for this trope, her genuine love and knowledge of these character’s and this story line really shines through, this series brings attention a topic that is very close to my heart and to read how these three aristocrats who have each got personal stories are helping those that are in need is as always tender and endearing.

“Alan, my Raven with his broken wing, I do love you. I am so glad you shoved me off my island,”

I just love that quote!

Mix that part of the story in with the fact that Raven is a blatant gruff, sex-god and Lily a wild, cunning fox then you have a stonking good romance. Temple really is my go to author for passionate, cleverly witty and sensitive books that grip you from the onset and keep you hooked.

I just love it and I cannot wait to see where Temple takes this series with the next instalment; Lord Stanton’s last Mistress. Very highly recommended!

This was an ARC from the author in conjunction with the blog tour, in exchange for an honest review.

Lord Ravenscar’s Inconvenient Betrothal is released today and can be found at Amazon .

Lara Temple writes strong, sexy regency romances about complex individuals who give no quarter but do so with plenty of passion. Her fifth book with Harlequin Mills & Boon, ‘Lord Ravenscar’s Inconvenient Betrothal,’ will be published in March 2018, and is the second in her Wild Lords series. Her four previous books are: Lord Hunter’s Cinderella Heiress, The Duke’s Unexpected Bride, The Reluctant Viscount, and Lord Crayle’s Secret World.

When she was fifteen Lara found a very grubby copy of Georgette Heyer’s Faro’s Daughter in an equally grubby book store. Several blissful hours later she emerged, blinking, into the light of day completely in love with Regency Romance but it took three decades of various fascinating but completely unrelated careers in finance and high tech before she returned to her first love.

Lara lives with her husband and two children who are very good about her taking over the kitchen table for her writing (so she can look out over the garden and dream). She loves to travel (especially to places steeped in history) and read as many books as possible. She recently went looking for that crowded little bookstore but couldn’t quite remember around what corner it was…hopefully it is still there and another girl is in the corner by the window, reading and dreaming…

A proud Yorkshire Lass, who is fond of a good cuppa and overly enthused with biscuits.
Full-time carer and owner of a demonic Patterdale Pup.
An avid reader and enthusiastic reviewer of many genres.
A budding writer and passionate about history.... I swear I was born in the wrong era.