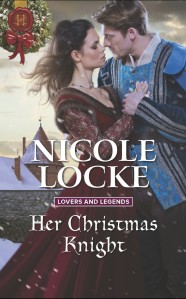 A knight to protect her—this Yuletide By order of the English king, Alice of Swaffham searches London nobility for the traitor dealing information to the Scots. Little does she know that the mysterious spy she seeks is the man she once loved and thought she’d lost forever…

If Hugh of Shoebury felt unworthy of Alice before, as the Half-Thistle spy he can never claim her heart. Now he must fight to keep not only his dark secrets—and Alice—safe from a vengeful king…but also his burning longing for her at bay!

This is the next instalment of Nicole Locke’s enchanting “Lovers and Legends” Series, this is a terrific addition and Locke doesn’t disappoint Her Christmas Knight is empowering and romantic with a darker undercurrent. I’ve said it before, but I do love Medieval Romance I find that this era and Locke’s work are raw and highly romantic.

Medieval Romance takes you to a brutal time where the men were real, harsh and untamed men and the women were just as strong, maybe not treated very well but they worked even harder to get what they wanted. That’s what I really like about this era, romance it’s always very gritty and raw.

Why had he danced with Alice? It could never be simply dancing with her. Stupid to think otherwise, but he’d been consumed with jealousy. He’d had no right, and yet he’d taken it…

Hugh of Shoebury is charged by King Edward to go back to his childhood home of Swartham to spy on the villagers, the Fenton family particularly, specifically Alice. This is all good as this isn’t anything new to him but the thing is, Hugh has a secret, a deadly secret that only he knows and one that could get him killed for treason if anyone finds out because in the eyes of the King he is doing just that by keeping this secret; he is committing treason. It’s all for a good cause, he is protecting the life of his best friend and mentor; Robert the black who after faking his own death moved marriage a Scottish Lass and Hugh is the only person who knows the truth. But, by taking on this assignment from the King, Hugh finds that his secret could very much be found out

Alice of Swartham while in London got pressured into playing a game, which should have been just a bit of fun but she soon finds out that it wasn’t just a regular childish game but a task that was set by the King. Alice is the only one to finish this game then in a combination of being threatened and pressured, accepts an assignment by King Edward to find the traitor who is passing information to the King’s enemies and who is hiding within her sleepy village of Swartham. The traitor has a seal; the Half Thistle that belongs to the King himself and is using it to correspond with Scots and outlaws and Alice needs to find that seal and hand over the traitor.

Alice at first comes across as a naive, stubborn young girl who is set in her ways. She is also very caring, hugely likeable and highly protective of her family which is why she is doing this duty for the King. When she finds that Hugh is back she has mixed feelings about his return, Alice has always held a torch for Hugh, ever since she was a young girl – but then again it isn’t surprising because is quite a man who would capture any young girl and woman’s heart. Alice was infatuated with him, that is until he broke her heart in a rebuke that put her off men for life, she has sworn that she hates him and yet, she still holds tightly on to that vow that she made as a child, a vow that he was the only man for her.

But she wouldn’t give up—she’d made a vow.
‘‘But don’t you see?’’ she said. ‘‘There wasn’t a reason to stop your kiss that day. I never saw you as you saw yourself. Like you do now. I only saw your strength, courage, and perseverance. That was the man I wanted. The man I vowed to marry.’’
‘‘You saw me wrong. You keep seeing me wrong.”

When Hugh finds out what the King has made Alice do, how he has put her into such danger. Hugh is fuming, not just the fact that the King has got an innocent woman to do a man’s job, but the fact that this could get her killed and as much as Hugh act’s the callous, unfeeling brute, he genuinely cares for her. He always has done! But there is fact that her search is getting too close for comfort, so he decides to “help” her with her mission.

Hugh may come as a manipulative and callous brute, who only cares about himself, but that is only a mask, a mask that he has hidden behind since childhood. Really, he is a kind, generous and valiant man who has seen too many hardships and experienced too much pain in his life, I have always liked flawed heroes and Hugh is perfect. He makes you want to wrap your arms around him and tell him that you will always be there for him, no matter what. He hasn’t had a lot of kindness shown to him, mainly because of his parentage the only person that was really kind to him was Alice, even as a young girl she had a light and caring nature that instantly drew away Hugh’s darkness that circulates him like a predator.

I really like their relationship, right from the beginning when she has vowed that she will hate him and she wants nothing to do with him and Hugh believes he is destined to be alone, there is a real buzz around them whenever they are in the same scene. Their love/hate romance is intoxicating and sweet and you are urging them on and at times you want to bang their heads together.

This moment right now was what she had dreamed of all those years ago when she’d demanded that Hugh kiss her. She didn’t want only his kiss—she wanted his love…

Now, King Edward is a shrewd, malicious man who takes pleasure in toying with both Alice and Hugh. He is a manipulator who preyed on Alice’s good nature, on her love for her family by threatening them and coercing her into doing what he wanted her to do. Just as with Hugh, he seems to be able to read their minds and know their deepest fears and darkest secrets and he plays on that, Kind Edward is one nasty piece of work and Locke has done an unbelievable job at capturing his manipulative and malicious side.

As always Locke sprinkles her own unique magic over this and creates a thoughtful, thrilling and at times, heart-wrenching story of finding love in the most dangerous times. Locke has handled Hugh’s past with sensitivity and respect and out of all that darkness and grief she has made Hugh into the great man he is, and the same can be said for Alice. I have always thought that Locke excels at writing heroines, her ladies are always as strong as the men, they know their own minds and always put their brains to good use.

Another enchanting and romantic Christmas story, which I absolutely recommend. It’s just so good!

This was an ARC from the author in exchange for an honest review.

Her Christmas Knight is out on 1st November and can be pre-ordered on Amazon.

Join 3,819 other followers
Follow Chicks,Rogues and Scandals on WordPress.com