Review – The Good, The Bad and The Scandalous (Heart of a Hero Series #7) by Cora Lee 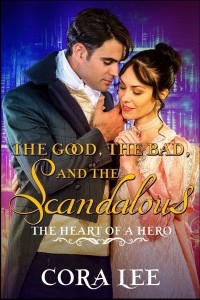 WHAT IF YOUR favorite superheroes had Regency-era doppelgangers?
And what if a group of them were recruited by the Duke of Wellington to gather intelligence for him during the Napoleonic Wars while they protected their own parts of the realm?
You’d get The Heart of a Hero series.

Andrew Elliott, Earl of Hartland, is no stranger to scandal. A notorious rake and eccentric genius, he fights crime in armor of his own design and celebrates his achievements with the merriest of widows. What the ton doesn’t know is that Hart has received a warning: danger is heading for London and it’s looking for Sarah Shipton.

Sarah discovers the bookshop her mother owns is failing and they will have nothing to live on when the month is out. So when the Earl of Hartland offers for her, she agrees to the marriage. But marrying Hart throws Sarah from the frying pan of imminent poverty into the fire of a world filled with science and peril she never knew existed.

How will Sarah cope with the knowledge that someone wants her dead? Can Hart keep her safe from a person hell bent on her destruction

The Good, The Bad and The Scandalous is book seven in this new and exciting Series; “The Heart of a Hero series” this series is made of up nine books that can be read as a standalone’s or as a series and it is written by nine fabulous authors. I fell in love with the series straight from day one when I got to read the initial prequel novella by Cora Lee “No Rest For The Wicked” and I was instantly drawn into the intriguing and sexy world that these (sometimes masked) heroes live in and I was instantly hooked by everything from the plot’s to the character’s and this one is great addition.

“I might know my way around a hammer and anvil.”

“I’m trying to picture you in a leather apron and heavy gloves, but it isn’t quite working.”

Andrew is an unusual man by day he is the notorious rake and eccentric charmer that woman want to bed and men want to be seen with, by night he don’s his suit of armour – which he designed and made himself – and goes out to apprehend those that are doing wrong, he finds them and hands them over to the authorities. Society are scandalized by his exploits but they are thrilled by them too, who knew that a handsome rake could be so selfless and brave.

But there is a side to him that nobody knows about, a side to him that no one in society can ever know about. He is also a part of a secret intelligence gathering ring founded by the Duke of Wellington himself, this ring has nine members all from different places in society, all with different backgrounds. They all help bring people to justice, people that in one way are another could threaten the very country that they are fighting to protect.

Andrew amongst other missives gets a message that book store owner Sarah Shipton is in grave danger, she has had a bounty put on her head by unknown assailants and in order to protect her he ends up causing a scandal which in turns forces his hand to marry her.

Sarah is in financial crisis, after the death of her mother she finds out that her mother has been hiding their financial situation from her. She learns that they are completely broke, the book shop where she has spent most of her childhood isn’t making the money they need, her dowry has been used to cover debts and they have nothing left. She is afraid that they are going to end up in the work house until one night at a ball she becomes embroiled in a scandal, where a knight in shining armour comes along to rescue her.

They make an agreement that can benefit both of them, for Sarah it’s not just financial protection but because of this bounty on her head she has got the ultimate protection from one of Wellingtons own. He will protect her from this unknown person who wants to harm her, and for Andrew he has got the very thing that he has never had, a family.

“You haven’t asked me a question, my lord.”He grinned.

“I haven’t, have I?”He took both her hands in his—their first skin-to-skin contact in their nearly ten-year acquaintance—and dropped to one knee.

“Sarah Shipton, will you make me the happiest of men and become my wife?” She arched an eyebrow.

“The happiest of men?”

“Too much? I’ve never proposed marriage to a lady before, so I wasn’t quite sure how to do it.”

“Too much for our situation, perhaps. But I appreciate the attempt at sentiment.”

At first they do what’s needed for both of them and as Andrew repeatedly says they “rub along well enough” but each of them realise that there is so much more to the person they have married, then what they originally thought. Sarah find him to be more than just a reprobate, a rake and a womanizer he is a kind hearted, eccentric genius with so much protective loyalty towards those that need his help. Andrew soon realises how much of a calm and intelligent woman she is and he finds her calming and she soothes his hectic mind and personality.

I do like Sarah and Andrew they are so much alike, they are like two peas in a pod. They are equally intelligent and their bantering is thought provoking and educating and highly enjoyable they seem to feed of each other. I particularly like how he doesn’t look down his nose at her, even though he is an aristocrat and she from working class stock he treats her as an equal and respects her for being an intelligent woman with her own mind.

“Save a life, get a kiss?” he grinned. “Can we make that a permanent agreement?”

“Yes,” she answered, leaning down again. “In fact, let’s make it two kisses.”

This time he was ready for her, and wrapped her in his arms when her lips met his.

I do really enjoy Lee’s work she brings her own individual charm and intelligence to the Historical Romance genre that is very rare, and this one is certainly no different. I love the whole concept of this series, favourite superheroes in the Regency era. It’s new and fresh and highly addictive to read and I have been hooked.

This was a ARC copy via the author in exchange for an honest review.

The Good, The Bad and The Scandalous is out now and can be found at  Amazon

Heart of a Hero Series

No Rest for the Wicked by Cora Lee (prequel novella)
Only A Hero Will Do by Alanna Lucas
Once Bitten by Aileen Fish
Lightning Strikes Twice by Jillian Chantal
No Hiding for the Guilty by Vanessa Riley
The Marquis of Thunder by Susan Gee Heino
The Good, The Bad, And The Scandalous by Cora Lee
The Archer’s Paradox by Ally Broadfield
The Missing Duke by Heather King
The Mercenary Pirate by Katherine Bone

One thought on “Review – The Good, The Bad and The Scandalous (Heart of a Hero Series #7) by Cora Lee”

Reblogged this on ELIZABETH'S BOOKS & TEA and commented:
Chicks, Rogues and Scandals Review of The Good, The Bad and The Scandalous (Heart of a Hero Series #7) by Cora Lee

Proud To Be Supporting The Poppy Appeal.

A proud Yorkshire Lass, who is fond of a good cuppa and overly enthused with biscuits.
Full-time carer and owner of a demonic Patterdale Pup.
Avid reader and reviewer of many genres especially historicals.
A budding writer and passionate about history and 'Happily Ever Afters.