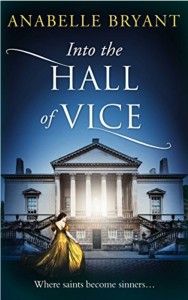 As joint owner of London’s most notorious gambling hall, The Underworld, Cole Hewitt spends his days surrounded by wealth – and looks every inch the debonair. But, unknown to most, he was born a bastard – and knows better than anyone the fine line between the elite and the slums.

When he falls for the beautiful Lady Gemma Amberson, sister to the Duke of Kent, Cole knows that his past means he will never be considered worthy of her. But Cole has no intention of being cast aside again.

But Cole’s attraction to Gemma hasn’t gone unnoticed – and some wish to thwart his plans, for the darkest of reasons. Cole may be used to getting his own way. But the question is: how far will he go to get it?

Gemma Amberson is on the hunt for information, she wants to know why and how her father; the previous Duke of Kent died. Was it as innocent as her brother has always told her? Or was there something else going on, something darker and deadlier? To find the answers to her questions she begins trawling the various gambling halls, balls and anywhere there is an abundance of gossip. On one trip she finally manages to gain a snippet of information, one detail that sends her to the front door of a Ms Devonshire, owner of an orphanage in Charing Cross. Instead of meeting with the lady and finally gaining answers, Gemma meets a vagrant with beautiful eyes called Goodworth who saves her from a thief.

Cole Hewitt lives a double life on one side he is one-third of the powerful owners of the most exclusive hell in London; The Underworld he is a rich, self-made man in his own right and on the other side he is Goodworth, the charming rogue that helps out at the Second Chances orphanage and also the owner of the said orphanage. His double life is as complicated as it is, once he meets a mysterious, beautiful woman outside his orphanage and then again Peering through the window of The Underworld his life takes an unsettling turn and he is thrown headfirst into trouble.

This is book two of this new and addictive bastard of the London Series, this time we are introduced to Cole Hewitt, the second manager of the Underworld. We got a glimpse of Cole in the first book; The Den of Iniquity and from that brief introduction you fell right under his charming spell, Cole is so different from explosive Max Sinclair. Cole isn’t one to use violence, even though he can look after himself when he has to, he uses his brains and his cunning to get what he wants.

On meeting Cole in the first book we got a sense of an educated man who is charming as well as cool and aloof, but he is so much more. He is completely different from Max Sinclair, Cole is a master of disguise, a man of the streets, he is like a chameleon who can adapt to any environment whether that be as a high and powerful aristocrat or a transient from the street.

He angled forward, his hand holding tight to the shelf above her head as he rocked closer, his arm flexed tight through his shirt sleeve.

He was tall and charming.

There was no debating that fact, though belatedly she noticed his eyes fell to the spine of the book clutched to her bosom. It took every ounce of willpower to resist the urge to cover the title with her hands.

‘What do you have there? Something I’d like to peruse?’ He winked, the scoundrel, and her breath caught, while her mind worked through the double entendre.

Words were difficult to form.

‘No, thank you. I can manage. Why do you ask?’He must think her a complete ninny.

And why not? She was acting the role.

But he’d kissed her. Stolen a kiss actually, the handsome thief…

Cole had a very hard start in life and that has had a huge effect on how he lives his life now, he hasn’t let his harsh childhood control him he has learnt from his experiences and he has become a powerful man in his own right. As a child, Cole was thrown from his aristocratic father’s moving carriage into the slums of Seven Dials and warned never to darken his father’s door again, from that day onwards Cole was a street urchin. He did have the good fortune to be found by a young woman called Maggie who ran a bit of a home for homeless boys, Maggie saved his life that day with her kindness which helped to put him on the path to becoming the man he is today.

Cole never forgot the kindness that Maggie showed him and since then he has looked after her and the boys she still keeps, between him and Maggie they opened an orphanage called Second Chances. The way he treats the children is heart-warming, he is a fun and loyal father figure in their little lives something that he didn’t have. He gives them a chance when hundreds of others would just turn their backs on them, he gives them jobs within The Underworld. Cole is just an absolute star, the way he looks after Maggie and the lads off the streets is so honourable.

I do really like Cole, his story is definitely a rag-to-riches story, he is so hardworking he has dragged himself literally out of the gutter to the prestigious position he is in now. He hasn’t forgotten his roots though and that endears him to me even more, he is still that smart, street-wise young lad who is as cool as a cucumber.

Gemma as well as her investigation into their father’s death is also severely worried about her sister Rosalinde who after their father’s death just stopped talking, her brother shut himself off from her and absorbed himself into parliamentary work and the only time he pays either of them any attention is when putting his foot down and dictating to them as though they were fellow members of the house of lords.

You feel a lot of sympathy for Gemma she has got so many troubles in her life but yet she is so vibrant and loving, the relationship between her and each of her siblings is so different, with her brother as much as she tries to get on with him, he keeps pushing her and Rosalinde away, he is quite a cold harsh man. But the relationship between the sisters is truly lovely, Gemma tries with all her might to get Rosalinde engaged in life again with the hope that one day she will speak.

He pulled her close, wrapping an arm around her shoulders and bringing her against his chest

‘I love you, Gemma. Tell me you will remember my words no matter what transpires during our visit.’

Her head jerked up in objection, her crystalline gaze razor-sharp.

‘What is happening between those ears? Where is my chivalrous, intelligent charmer?’ She knew the right thing to say. He breathed easier, mentally chastising himself for showing his sudden insecurity.

He couldn’t lose her.

Yet her brother’s influence threatened; a powerful foe.

She turned within his embrace and placed a kiss on his chin. It wasn’t enough.

‘ Your brother will never approve.’

I think Bryant has done a marvellous job with these two, matching the suave, poetry-reading charmer who was born on the wrong side of the sheets with the aristocratic daughter of a mighty Duke is a stroke of genius. It’s very Romeo and Juliet!

Now, I adored Max Sinclair from the first book, but I have to say Cole has inched his way past. He is a sensitive, tender and highly protective man, who treats everyone equally from the lowest street urchin right up to Rosalinde, if they are good people then they are blessed with Cole Hewitt’s love but just don’t get on the wrong side of him.

Just as with the first book, Into The Hall of Vise is an edge-of-your-seat thrilling romp. It is so sexy, the chemistry between Cole and Gemma just sizzles right off the page, they are a fascinating couple and I love them to bits, the way their lives and personal stories entwine together to create a fabulously charming, intricate and fast-paced story is a triumph.

I am really getting into The Bastards of London and yet again I am looking forward to reading the next instalment.

A hugely enjoyable, sophisticated Historical Romance and I cannot recommend it enough.

This was an ARC copy via NetGalley in exchange for an honest review.

Into The Hall of Vise is out now and you can find it on Amazon.