What is the Lovers and Legends series?

I don’t know. I didn’t come up with the name, Harlequin did. I do, however, love the name because it sounds Jackie Collins-ish. That may have made it worse to my understanding what the series will entail because if there ever was a legend she was it. I’m definitely not.
Oh, I know I’m supposed to have the answer to what the series is. After all, I’m the person at the keyboard. But the funny thing about creating something is it never feels as if it’s coming from you.

Certainly none of these characters or their stories, or the plots and intrigues and villains feel like they’re coming from me. It feels more like I’m just the medium for them to tell their story. Which now makes me sound like someone from Poltergeist, when all I am is someone trying to explain this while eating pretzels.

But I do have stories to tell, and there will be many in the Lovers and Legends series. So far, there are ten. I have a lot of voices in my head.
They are not written in chronological order, nor are they written in order of importance. They’re more like threads in a tapestry. They can be read separately, and each has their own Happily Ever After.

But everything hubs around The Knight’s Broken Promise, which introduces Robert of Dent, his friend Hugh, and the Colquhoun clan. All the people in that book will have their own stories, and the best part, you’ll see them again and again. For instance, you’ll be introduced to Gaira’s brother, Malcolm, in The Knight’s Broken Promise, hear about his grief in Her Enemy Highlander and struggles in The Highland Laird’s Bride. Eventually, he’ll have his own happily ever after, too.

What of the Legend? That’s first revealed in 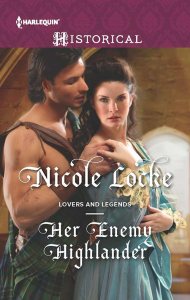 Her Enemy Highlander. It’s a Jewel, which has many myths attached to it. Thus, it becomes a powerful talisman for both good and evil. In The Highland Laird’s Bride, you’ll find its purpose. In Malcolm’s story, you’ll know what will become of it.

But before Malcolm’s story, there will be Rhain’s, who is brother to Teague, who is friends with Robert. And I’m currently writing Hugh’s story from The Knight’s Broken Promise for a later 2017 release.

I’m also trying (and failing) to rein myself in from talking about the other people and voices in my head. Yet someday, I hope to chat about them all while sharing my bag of pretzels.

In the meantime, I may not know exactly what the Lovers and Legends series is, but I’m typing it as fast as I can to find out.

More about my work at  www.nicolelocke.com