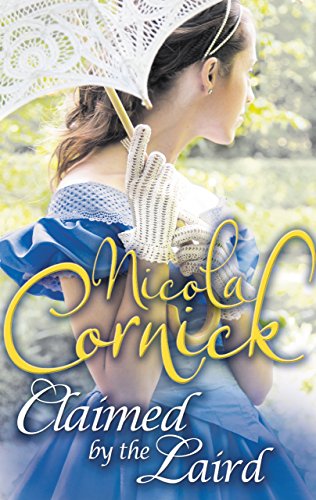 Back Blurb :
Secret’s And Scandal
Lady Christina McMorlan – beautiful, independent and daughter of a duke, but at past thirty she’s just an old maid in the eye’s of fashionable society. Dutifully hosting her father’s parties and caring for her siblings, by night she live’s another life as The Lady, head of a notorious whisky smuggling gang that support’s her impoverished clan.
Lucas Black scorn’s the nobility who disparaged his mother. Now a spy, he;s charged with bringing down Lady Christina’s gang. He think’s The Lady is a bored society spinster, from whom he’ll easily seduce secret’s from. But, if Christina fall’s for him , she will put at risk all that she care’s about.

My view :
I have read all there of the Scottish bride’s series’ and I really think that this one is by far the best, where as the previous two did tend to drag on quite a bit too much for my liking and they did take an age to actually get on with the plot; but this one is different. Claimed by the Laird has so much going for it stunning plot, character’s and enough suspense, imagination to keep you hooked from start to finish.
The character’s are so precise and you get to see there personality’s right from the off, the way that Christina and Lucas bounce off each other is brilliant, the pent-up emotion and confused feeling’s between the two make great reading. I love the way that they first meet each other how Lucas know’s what Christina is thinking and how she is feeling even though he is blindfolded and at that moment he doesn’t even know who she is, it is beautifully written. There is a raw energy every time that both of them are in the same scene, it is that all-consuming mutual attraction that you get in the first flush’s of love but there’s is the real thing.
It is lovely to finally get to the Christina after two book’s seeing her skirting the edge’s and not quite knowing her, she is definitely worth the wait she is a complex character with so much going on, to family and society she is this plain rather frumpy spinster that sit’s on the edge and take’s care of everyone else. When in actual fact she is a spirited, confidant and highly seductive young woman, a woman who just happen’s to be the leader of a Whisky – smuggling gang and who just need some attention and someone to look after her for a change. I think that between her and Lucas she is the more complex character, Lucas is very easy to read he is out to find out what happened to his little brother, he is very closed off from the world, he is ruthless and doesn’t let many people see how very vulnerable and fragile he is from year’s of being emotionally hurt, until of course he meet’s Christina. I do like Lucas though he is such a strong character, he has a presence even when he isn’t in a scene, he is very rememberable charming and suave and such a handsome man – especially when he is pruning the Lilac’s, a very memorable scene.
I really do like Claimed By The Laird, it was worth the wait after reading the previous two, it is a charming read and well worth a look, and I don’t think you have to read the previous two because this one could be a stand alone novel, obviously there is mention of the character’s from the other two but they are explained so there is no confusion over who is who. This one is definitely going on the bookshelf, it’s just one of those you can read again and again.

4 thoughts on “Claimed By The Laird ~ Review”